Burundi gets new president after 15 years

by Ediri Oyibo
in Africa 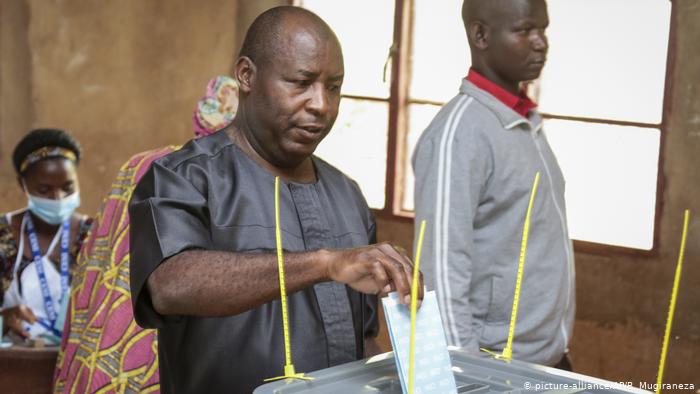 Burundi is set to get a new president after President Pierre Nkurunziza, whose government has repeatedly been accused of rights abuses, held on to power for 15 years.

Retired Army General, Evariste Ndayishimiye, candidate of the ruling party, CNDD-FDD, is expected to take over power after an election that has been described controversial was held in Burundi on Wednesday.

Ndayishimiye, currently the Secretary General of the ruling party, is one of the most influential political figures in Burundi and a long time close ally of the outgoing President.

The President-elect was born in 1968 in the province of Gitega, the new capital of Burundi. After the assassination of President Melchior Ndadaye in 1993 the first democratically elected president in Burundi history, Gen. Ndayishimiye, a lawyer, survived the ethnic cleansing of Hutu students at the University of Burundi in 1995.

Ndayishimiye together with the outgoing President, Nkurunziza, who was at the time a lecturer at Burundi University, fled the country through a crocodile infested swamp to neighboring Democratic Republica of Congo.

Gen. Ndayishimiye is one of the co-founders of CNDD rebellion 1994, in a guerilla warfare against the then Burundi administration.

According to reports, in early 2000, CNDD split into CNDD-FDD and the new group was formed led by Hussain Radjabu and included among others, Pierre Nkurunziza, Evariste Ndayishimiye and Adolphe.

Gen Ndayishimiye was one of the top CNDD-FDD officers that witnessed the signing of the global ceasefire with the government of Burundi in 2003 in Pretoria under Mandela mediation in which he was the chief negotiator.

Resulting from the final Arusha Peace Accord in 2004, CNDD-FDD joined Burundi government and Évariste Ndayishimiye was appointed deputy chief of staff of the new National Defense Forces (FDN) at the rank of Major General.

He was transferred to the dockets of interior minister and public security between 2006 and 2007 before he was appointed chief of military affairs in the President’s office in 2008.

During a congress organized on January 26, 2020 in Gitega, CNDD-FDD delegates choose Évariste Ndayishimiye as candidate for the presidential election of May 20, 2020.

He is also the President of Burundi National Olympics Committee. He is married to Angeline Ndayubah.

According to political observers, Ndayishimiye is likely to nurture optimism in the country and consolidate the achievements of his party and those of President Nkurunziza.