by Oghenekevwe Uchechukwu
in Banking, News
Reading Time: 3 mins read
A A
0 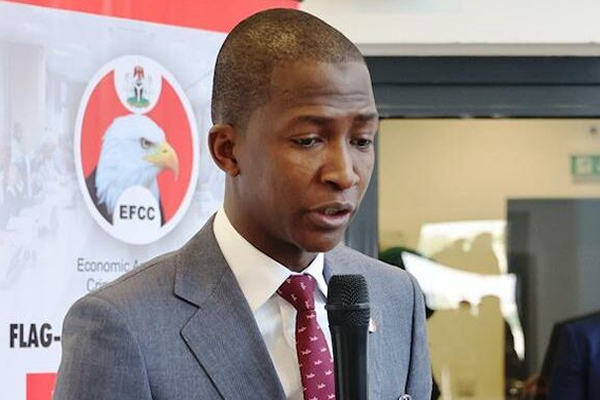 The Chairman of the Economic and Financial Crimes Commission (EFFC) Abdulrasheed Bawa, has called for collaboration from stakeholders in the financial sector to prevent banks in the country from becoming insolvent.

Bawa made the call in Lagos on Wednesday, while delivering a goodwill message at the opening of a two-day workshop organised by the Nigeria Deposit Insurance Corporation (NDIC), with the theme: “Effective Investigation and Prosecution of Banking Malpractices that Led to the Failure of Banks”.

The EFCC Chairman, who was represented by the Commission’s Lagos Zonal Commander Ahmed Ghali, said forensic analysis of the annual reports, bank statements and other financial documents of some of the failed banks investigated by the EFCC clearly showed a pattern necessitating collaborative efforts aimed at making the nation’s banking sector work more effectively.

He noted that many households, small businesses and large corporations rely on commercial banks to provide their financial needs, and urged bank officials to avoid engaging in fraudulent activities that can lead to a breach of public trust.

TheNewsGuru.com (TNG) reports that between 1994 and 2006, 45 banks in the country have had their licences revoked by the Central Bank of Nigeria (CBN), having been termed failed banks.

The Federal High Court issued orders for them to be wound up and appointed the NDIC as Liquidator of the banks.