The discourse, this week, relates to the implications of the CBN Governor’s plan for banks “to increase their capital base above the present N25bn”, which incidentally, was equivalent, to $195m (N127-N130=$1) in 2004, but has become seriously eroded to barely $75m today! Notwithstanding, CBN Governor, Godwin Emefiele did not reveal how the inexplicably, battered Naira Exchange Rate, which is actually, the prime cause of the sliding value of the capital base of Nigerian banks will be rescued.

Hereafter, issues relating to Emefiele’s call for higher capital base will be examined in an interrogative prose, against the backdrop of former CBN Governor, Chukwuma Soludo’s consolidation exercise in 2005, so as to assess how well the bigger banks created, ultimately impacted the economy and development.

Q: Isn’t it good for banks to increase their grossly diminished capital base, so that they can adequately fund the real sector to drive double-digit growth rates with more jobs?

ANS: Incidentally, Soludo’s banking consolidation also fielded the promise that bigger capital base would increase the capacity of banks to comprehensively fund the productive sector. Regrettably, however, over a decade later, with a recession, and less impressive growth rates below 3 per cent in tow, rather than the anticipated double-digit growth rates, the unexpected products of Soludo’s recapitalisation have ultimately become oppressive double-digit inflation and interest rates and serial bank failures with over N5trn bad debts passed on to AMCON four years later in 2009! With such outcome, there is no reason to suggest that another recapitalisation would rejuvenate businesses and foster the double-digit growth expectations in Emefiele’s proposed 5-year plan.

Q: You cannot deny however, that Soludo’s recapitalisation facilitated the expansion of Nigerian banks internationally.

ANS: The expansion you refer to was facilitated by the untenured, interest free $7bn largesse, that Soludo inexplicably, seemingly ‘dashed’ banks in 2006! The foreign expansion of Nigerian banks was not the direct product of capitalisation.

Q: Is the economy liquid enough to support a significant recapitalisation exercise that will support the real sector with adequate and cheaper credit?

ANS: Any economy that is eternally, undeniably, flush with excess cash liquidity, should have funds to recapitalize banks. The CBN, for example, unabashedly, mopped up to sterilize over N18trn (over $54bn) of perceived surplus funds from the money market, last year, in order to restrain inflation. So the funds are there; furthermore, foreign portfolio investors may also buy into the recapitalisation exercise, if issues relating to internal security and currency depreciation are properly addressed.

However, if funds from both domestic and foreign investors are not readily forthcoming, we may witness a repeat of the pervasive scam of, insider trading, which characterized Soludo’s 2005 consolidation exercise, during which banks gave huge loans, directly, to their customers and cronies to purchase their own shares! Instructively, however, in responsible economies elsewhere, the crime of insider trading attracts extended jail terms.

Q: Is it not true that banks are not lending aggressively to the productive sector because of their shrunk capital base?

ANS: There is no scarcity of loanable funds in Nigeria’s money market; the modest advances to the productive sector are certainly not the result of lack of funds. Indeed, Government and CBN are actually the main beneficiaries of about 50 per cent of bank loans, while the oil and gas subsector probably accounts for over 25 per cent of all bank loans. For example, according to a story titled “CBN spent N2.36trn to mop up N18.7trn in 2018” by Babajide Komolafe, in Vanguard Newspaper edition of January 7, 2019, the CBN reportedly borrowed over N18.7trn from the money market and surprising paid over N2.35trn primarily to banks, as interest on these risk free loans, in order to reduce the perceived inflation instigating Naira surplus in the money market.

Notably in 2018, the amount of Treasury bills CBN sold at an average rate of 12.65 per cent to mop up and stifle the inflationary threat of Excess money supply, rose alarmingly by 137 per cent to N18.7trn, compared to barely N7.9trn in 2017! Predictably, therefore, banks are more comfortable with this type of risk free business with higher yields, than the often volatile exposure that much higher interest rates create on bank loans to real sector operators.

Q: So if money supply is not the problem, why are banks not lending to the real sector?

ANS: Yes, although there is a systemic liquidity surfeit, in the money market, but cost of borrowing remains very high, often, between 18-30 per cent i.e. rates that would challenge real sector operators. Instructively, however, CBN, actually, crowds out the real sector from loanable funds available with the double-digit interest rates it pays to bank to reduce the systemic liquidity surplus that drives inflation.

Q: Are you saying that the N18trn mopped up in 2018 would have been available to drive the real sector if liquidity control was not a problem?

ANS: Yes, without the erstwhile competitive interest of CBN in mopping up excess money supply in the money market to hold back inflation, the N18trn plus that CBN mopped up in 2018 together with other loanable funds could energise the real sector, with much lower interest rates, if inflation is first kept in check!

ANS: Yes, you are right, however, if CBN does not sustain its liquidity mop up, the present gravely eroded capital base of $75m would most likely be further devalued because of ravaging inflation. Consequently, unless the root cause of perennial liquidity surplus that drives inflation, in the money market, is contained, recapitalisation may not improve access to cheaper credit to businesses. Furthermore, although CBN could specify a minimum capital threshold for the establishment of various bank categories, in actual practice, however, each bank should, thereafter, independently, choose when to expand their operations and move to the next level, rather than be compelled to do so by Regulatory Authorities.

Q: Is there any other means to expand lending to the real sector without increase in capital base?

ANS: Yes. Invariably, if the present mandatory Cash Reserve Requirement of 22.5 per cent is reduced to say 10 per cent or less, Naira liquidity and loanable funds may double, even if the present capital base of banks remains as $75m. Conversely, however, such additional liquidity will drive higher inflation and interest rates, with declining consumer demand to threaten growth.

Consequently, even if CBN compels banks to allocate at least 60 per cent of their advances to the real sector business as recently directed by CBN, these funds may remain ironically unutilized, if inflation remains double-digit and drives interest rates nearer to 20 per cent!

Q: So what would be the net impact of the proposed increase in the capital base of banks?

Arguably, however, with the richer pickings available from CBN’s intensified liquidity control measures, commercial banks may, as usual, not also give the time of day to real sector businesses, such as SMEs, which are traditional drivers of increasing employment and inclusive growth.

Ultimately, the increasing threat of inflation will push CBN’s Monetary Policy Rate (the rate banks pay when they borrow from CBN) beyond 15 per cent; in such event, businesses may be forced to pay between 20-30 per cent or more to borrow, while consumers, whose incomes have been savagely ravaged by INFLATION, may also reject higher priced local products for cheaper, import substitutes, while poverty will invariably deepen! 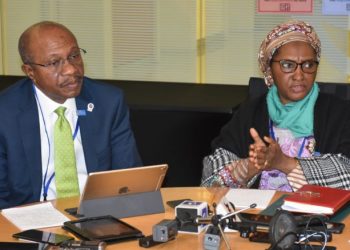