by Ediri Oyibo
in Business, News
Reading Time: 2 mins read
A A
0 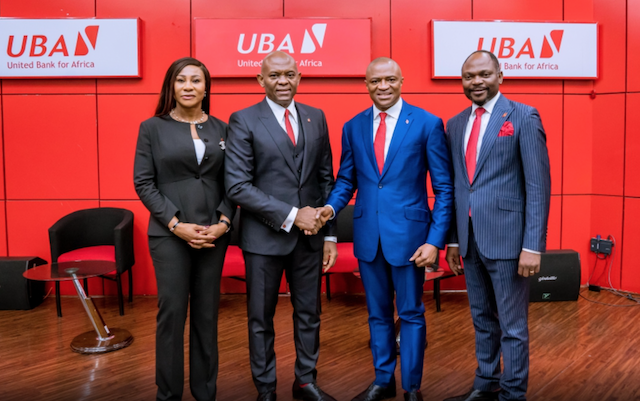 TheNewsGuru.com (TNG) reports that UBA made the announcement on Monday in continuation of efforts to maintain its strategic growth plan.

Alawuba brings his experience in Nigeria and UBA Africa to drive UBA forward and fulfil the Group’s ambitions and destiny, according to a statement by the bank.

The announcement came on a day the bank made known its plan to implement a separate holdco management structure, subject to regulatory approval.

The new GMD joined UBA in 1997 and has held a series of senior positions, including as the CEO of UBA Ghana, the CEO of UBA, Africa and most recently, as Group Deputy Managing Director.

Similarly, Muyiwa Akinyemi was announced as UBA’s new Group Deputy Managing Director and will oversee the entire business in southern Nigeria and continue to provide GAM leadership to the entire Group.

Akinyemi joined UBA in 1998, as a Senior Banking Officer in UBA’s Energy Bank and has served the Group in Nigeria and our broader Africa network for 24 years.

Also, Emem Usoro is now the Executive Director, Nigeria North. She joined the Group in 2011 and has served in a series of senior regional appointments across Nigeria, covering the retail, corporate and public sectors.

Sola Yomi-Ajayi is the new Executive Director, Treasury & International Banking. Sola has been with the Group since 2004 and has considerable international experience, culminating in her appointment as CEO of UBA America.

Alex Alozie has been appointed as Executive Director/Group Chief Operating Officer. Alex joined the Group in 2019 as a Deputy General Manager, and has driven the Group’s digital transformation and operational efficiencies.

Other appointments include Ugochukwu Nwaghodoh – Executive Director, Risk & Finance. Ugo joined the Group from PwC in October 2004. He has since held a series of significant roles in the areas of performance management, compliance,financial control and reporting.

Sampson Aneke – Group General Manager – Retail, Digital & Transaction Banking. Sampson joined the Group in 2019, and had responsibility for SME banking across the Group’s African network, and most recently was responsible for the Group’s business in Lagos and southern Nigeria.

Sanusi Mudasiru – Chief Compliance Officer (Audit & Compliance). Sanusi joined the Group in 1998 and his career has been devoted to ensuring the robustness of the Group’s compliance and internal control functions. He has served as COO for UBA Ghana, UBA Zambia and UBA Africa. Prior to this appointment, he was Group Head, Compliance.

TNG reports the appointment for the Executive Director, UBA Africa will be announced on January 01, 2023.

According to the bank, all appointments take effect from August 01, 2022 and are subject to regulatory approvals.

Beyoncé to take out ableist lyric from new song ‘Renaissance’

EPL: Murphy slams C.Ronaldo for storming out of Old Trafford

EPL: Murphy slams C.Ronaldo for storming out of Old Trafford

Buhari's impeachment move: Yes majority of us wanted him out - Sen Bulkachuwa