The first shall be the last – Femi Aribisala

When Christians preach the false prosperity gospel, their focus is on this life. They talk of Christ becoming poor that Christians may become rich.” (2 Corinthians 8:9).

But the true gospel is not about poor Christians becoming rich in this life. It is about rich Christians becoming poor. Femi Aribisala Neither is the gospel about this world but about the kingdom of God. It is about the great reward God has prepared in heaven for the redeemed as consolation for accepting the vicissitudes of this life. (Matthew 5:11-12). Nigeria, China miners set to strengthen economic relations The choices are straight-forward. Our consolation can be in heaven or it can be on earth. There is no room for double-mindedness. (James 1:7-8).

If we want to be consoled now, we are going to be dispossessed later. If we gain this life, we will lose the life to come. (Matthew 16:25-26). Role reversal Jesus presents this kingdom dynamic in the parable of the rich man and Lazarus. The rich man lived sumptuously on earth, while Lazarus lived in penury.

Pst. Adeboye: God told me only those whose time had come will die of Coronavirus [Video]

However, there was a reversal of fortune when they died. The rich man ended up in a place of torment, while Lazarus ended up in Abraham’s bosom; a place of felicity. Did the rich man come to such a terrible end because he was a bad man on earth? Jesus never said anything like that. We are not told he abused Lazarus, or that he did him any harm. But he clearly had no concern for him and disregarded him. Abraham simply told him he ended up in a place of torment because he was rich on earth: “Son, remember that in your lifetime you received your good things, and likewise Lazarus evil things; but now he is comforted and you are tormented.’” (Luke 16:25). The rich man already got what he wanted. He had big houses, good food, expensive cars, lovely clothes, and high social status. He was complete in them.

But he discovered in death that his comforts were gone for the ages of the ages; whereas the joys of poor Lazarus just commenced. How much better, therefore, is poverty in this life, with the friendship of God, than riches, with all that the world can bestow? And how foolish it is to seek our chief pleasures in this life of merely 80 to 100 years? The rich man became a beggar in death. He begs for mercy for his wayward brothers.

He begs for water. But he who denied Lazarus a crumb in life is now denied a drop of water in death. James warns: “there will be no mercy to those who have shown no mercy.” (James 2:13). Honour God to earn His honour The day is coming when those who now despise the poor would gladly receive kindness from them. Jesus says: “Ask and it shall be given you.” (Matthew 7:7). However, the time is coming when men will ask until they are blue in the face and it shall not be given to them. That is the message that pastors have been careful to hide from Christians.

Death, the leveler In life, many bad things happen to the poor from which the rich are exempted. But death is the equaliser. In spite of his wealth, the rich man could not escape the fate of the poor man. He also died. But the beggar was the first to die. As a rule, the rich live longer. They eat better food, live in more sanitary conditions and have better access to good medical facilities. Nevertheless, they also die in the end. Indeed, it is advantageous to the poor for their miserable life to be brought to a speedy end.

Thus, Isaiah says: “The good men perish; the godly die before their time, and no one seems to care or wonder why. No one seems to realize that God is taking them away from evil days ahead. For the godly who die shall rest in peace.” (Isaiah 57:1-2). Jesus gave no indication that poor Lazarus was buried. They probably just dumped his body somewhere. He died and people forgot about him. It was good riddance to bad rubbish. But when the rich man died, he was buried. He lay in state, with a train of mourners all around him. They probably put him in a Mercedes-Benz coffin.

His obituary was carried in all the national dailies. Everyone who was anyone was at his burial. An orator was there to sing his praises. A monument was probably erected over his grave. How ironic that the man whose life was thus celebrated was at that very moment in torment for his self-centred life. On the other hand, angels carried dead Lazarus with pomp and circumstance to Abraham’s bosom. While alive, his body was covered with sores; but in death he was without spot or wrinkle. Though poor in life, he was now rich in death.

The misery of the formerly rich man was aggravated by his knowledge of the new felicity of Lazarus. Thus, Jesus said to the Jews who were enriched by the gospel: “There will be weeping and gnashing of teeth, when you see Abraham and Isaac and Jacob and all the prophets in the kingdom of God, and yourselves thrust out.” (Luke 13:28). Life lessons What lessons are we to draw from this? Men of the world have their portion in this life. (Psalm 17:14). The poor will be consoled in the world to come.

Thus, the men in the Hebrew “Hall of Faith” despised the good things of this world: “They desire a better, that is, a heavenly country. Therefore, God is not ashamed to be called their God, for He has prepared a city for them.” (Hebrew 11:16).

Christians need to tell God emphatically we don’t want to receive our consolation here and now. We want it in heaven. “He that believes shall not make haste.” (Isaiah 28:16). Living in luxury while unmindful of the distresses of the poor and the afflicted is very provoking to God.

He says in Amos: “Woe to you who lie on beds of ivory, stretch out on your couches, eat lambs from the flock and calves from the midst of the stall… who drink wine from bowls, and anoint yourselves with the best ointments, but are not grieved for the affliction of Joseph.” (Amos 6:3-6). Remember what Jesus says: “Many who are first will be last, and the last first.” (Mark 10:31).

Pst. Adeboye: God told me only those whose time had come will die of Coronavirus [Video] 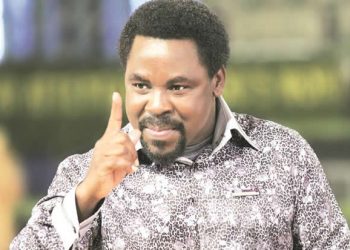 TB Joshua announces that Christians can be infected with COVID-19