IN the name of order or for disorder, but definitely in their interests, international powers perpetually intervene in African affairs in order to build the world in their graven image. This week, the United States, US, under the cover of human rights, intervened in the Nigerian judicial process.

The Rwandan conflict: A necessary lesson for Nigeria, By Theophilus Ejorh

There were mass protests against police brutality in Nigeria some months ago culminating in the October 20, 2020 military shootings at the Lekki Toll Gate, one of the venues of the protests. These enraged many and there were demands for a thorough investigation to determine what happened, identify the victims and bring perpetrators to justice.

The American government was one of the foreign powers which made this demand. The then American Secretary of State, Mike Pompeo, issued a statement within hours of the shootings saying: “We welcome an immediate investigation into any use of excessive force by members of the security forces. “Those involved should be held to account in accordance with Nigerian law.” This ordinarily made sense, especially with conflicting local and international claims on the Lekki events in particular and the general protests tagged End SARS. The Nigerian government did the needful by establishing judicial panels of inquiry that will adopt public hearings.

In Lagos, the epicentre of the protests, the State Governor, Babajide Sanwo-Olu, established the ‘Judicial Panel of Inquiry and Restitution into abuses by the Special Anti-Robbery Squad, SARS’. As part of the terms, the panel is empowered to take evidence from all victims or the families of victims of police brutality, determine the compensation payable, and also “determine the officers (or anyone for that matter) responsible for abusing any victim and to recommend the prosecution of such persons.” The panel, headed by retired Justice Doris Okwuobi, has a fair representation, including the organisers of the protests, human rights activist and senior lawyer, Mr. Ebun Adegboruwa, and Mr. Taiwo Lakanu, a retired Deputy Inspector General of Police.

However, in the course of this judicial process, the US choose to intervene through a ‘Report’ on the shootings which are under investigation. In a March 30, 2021 report tagged, ‘2020 Country Reports on Human Rights Practices: Nigeria’, it sought to cast doubt on the panel’s work by declaring somewhat magisterially that: “Accurate information on fatalities resulting from the shooting was not available at year’s end.” How did it know? Did it conduct its own investigations? If so, where is the report? Has it an insight into the findings of the panel? If so, how: through spying, interviewing members of the panel? What is the motive of the American government in reaching such a baseless conclusion? Is it to intimidate the panel or influence its outcome? Is this declaration meant to divert attention or dictate an outcome to the judicial panel? Is it to assure the Nigerian Army that America will help it cover its tracks? Clearly, the American report is aimed at circumventing the work of the panel and casting doubt in the minds of Nigerians.

As we know, there are serious acts of police brutality in the US which has led to the universal ‘Black Lives Matter’ movement. Despite this, the rest of humanity has sought to respect the American judicial process. So, even with incontrovertible video evidence of the American police murder of George Floyd, people are giving the American judicial system the freedom to operate, including giving suspects the benefit of doubt. So, it will be unthinkable of the Nigerian Embassy in Washington to issue a report casting doubt on the American judicial system or announcing there is no accurate information. But it is in the DNA of the American establishment to claim to be knowledgeable on all issues, when it might actually be as dumb as Donald Trump.

While the Americans are squash bucking like the cowboys of old, you do not need a Markle Meghan or Prince Harry to tell you that the British are much more circumspect. So, when British diplomats talk, you need to understand the connotative and denotative meanings of their words. That is why I am still studying this week’s statement by the British High Commissioner to Nigeria, Catriona Laing, that the British are willing to assist Nigeria fight insecurity. She said: “We are extremely concerned about the deteriorating security situation. I mean, Nigeria is facing a lot of problems everywhere – in the Northeast, terrorism; in the Northwest, banditry, kidnapping; in the Middle Belt, the farmers-herders conflict; in the South, the Niger Delta conflict everywhere and the secession movements in the Southeast. So, Nigeria is really struggling… So, we are here for a long time. This is a Nigerian partnership. Your insecurity becomes our insecurity if we don’t help you tackle it. So, we are here and we are trying to do our best to support you.”

I am wondering what this means given the fact that unlike the Nigerian Civil War when it denied the government support, the British actually have a defence pact with Nigeria signed in August 2018 to help fight insecurity. Under that pact signed by then Prime Minister, Theresa May, Britain was to assist Nigeria expand its provision of military equipment, including anti-mines, and train over 30,000 Nigerian military as full army units rather than individual soldiers before they deploy against the Boko Haram and other terrorists. Ms May had announced that the pact is to ensure that: “No-one should live in fear of being targeted by militants or forced from their homes, and no child should lose out on an education because of the threat of terror…We are determined to work side by side with Nigeria to help them fight terrorism, reduce conflict, and lay the foundations for the future stability and prosperity that will benefit us all.” Under the pact, Britain was supposed to deliver a new £13 million programme to educate 100,000 children living in the conflict zones, provide equipment, teacher training, and safe places to learn; cut the number of new recruits joining Boko Haram by tackling the lies and false information spread by the group to attract new members and implement a new Nigerian crisis response mechanism, similar to the UK’s COBR system to help the government respond to incidents like terror attacks. Also, Britain was to help Nigeria strengthen policing, reduce piracy in the Gulf of Guinea, tackle organised crime – including kidnapping and trafficking, and stamp out corruption.

So, three years down the line, the British High Commissioner cannot be promising Nigeria security assistance. Rather, she should tell us how far Britain has gone in implementing the security pact and why British involvement does not seem to have had any impact on the ever-deteriorating security situation in Nigeria. Ultimately, only Nigerians can save their country; hope in foreigners might be grossly misplaced. 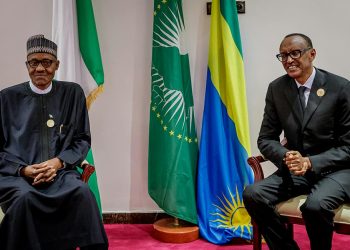 The Rwandan conflict: A necessary lesson for Nigeria, By Theophilus Ejorh

Nigeria will overcome her challenges – Osinbajo