Nigeria is a country some talk  about in the past tense. Like the famous author, Chinua Achebe titled his last book on Nigeria: “ There Was A Country”

The United  States of America, an expert in primitive accumulation, exploitation and all sorts of wars from low intensity through biological, chemical to nuclear, is also one of the greatest scientists and morbid anatomists in the world. Having treated Nigeria for all sorts of ailments and  put her   under years of close examination, the Americans reached the conclusion that she  is a terminal case with a few years to live. Recommending she be put on life support, the American Central Intelligence Agency (CIA) in its  March, 2005 Report titled “Mapping the Global Future” stated authoritatively that Nigeria is “a bad marriage” that  will expire in 2015.  So for America, Nigeria’s continued existence defies science   as there is no scientific or earthly reason for its continued existence.

In March, 2010, then Libyan President Muammar Ghadaffi also examined Nigeria and concluded that its immediate survival lies in splitting the country into two along religious fault lines so as to avoid a cataclysmic earthquake.

However, I know a Nigerian, Dr. Bukar Usman (BU) from Biu, Borno State who is so confident about Nigeria and its existence, that he is investing his life in its future.

At the 2016 Annual Lecture of the Society for International Relations Awareness (SIRA) in Abuja,  I had random discussions with a familiar face. I could not really place it as it seemed to come from  a distant past. After the lecture and participants were saying their   goodbyes, he asked me for  my phone number. At that point, I politely hinted that I could not recall his name. “Bukar Usman” the polite voice answered. I involuntarily   recoiled. He noticed, smiled and asked whether I would still want to give my phone number. For those of us  activists in the anti-military rule struggles, the name  was quite well known. He was an intellectual   in the intelligence community who was seemingly in the shadows,  but whose named was whispered around. I recall that the only time I met him was in 1990 when in the aftermath of the attempted ‘Orkar’ Coup, I had been part of the Nigeria Union of Journalists (NUJ) delegation  who met then Director of Intelligence, Brigadier-General Haliru Akilu to demand the release of detained journalists.

Now, 26 years later, I was meeting Usman again. I recovered quickly and gave him my phone number. I got to know he had retired after  35 years in service including 27 in the Cabinet Office  working with  notable  names like S.B. Agodo, Babagana Kingibe, Umaru Shinkafi, Ismaila Gwarzo, A.K. Horsfall  and Generals Abdullahi Mohammed, M.C. Ali and I.D. Gumel.

I  was surprised when Dr. Usman called. He requested my office address to send some of his publications since he thought I love books. Nothing prepared me for the parcel I received; books, magazines and journals. I   blinked. They were solid books, not some pamphlets or songs of praise former public officers are  known to publish. They included an October, 2014  publication:  “A History of Biu” It is an  authoritative 693-page book on “Viu” the last capital of the  Babur/Bura  people, which became an emirate in 1535. There were children books, short stories and folktales.

My perception of him changed; except for former President Olusegun Obasanjo, I had not known of a former public servant being so intellectually productive. He however has an advantage over the latter; his books are   quite diverse covering vast fields of  politics,  history, culture and literature.

This July, Dr. Usman sent me another  gift of eight new books he had produced ranging from public policy to language and national security. One of them is the  2018 edition of his autobiography, the rich 287-page “Hatching Hopes”  published by Bookcraft.

As I tumbled through his books, I realized Usman   is a public intellectual anxious to preserve our ancient and contemporary traditions, focused on the present and dedicated to building  an enduring legacy  not just for his personal future, but that of Nigeria.  He is a 77-year old intellectual   with  a lucid mind, a programmed  life and  toiling for a structured and assured future for  our country.

One of the advantages China has and which propelled its development, is building on its  ancient  civilization, traditions  and historic past; Usman has such a mindset for Nigeria. For this, he has expended huge funds and time to collect, recreate, preserve and  popularize  our country’s myths, fables, folklores, legends, and in so doing, the old beliefs of the various Nigerian peoples.

In my analysis, Usman’s   best gifts to us, are two books that speak to our cultural origins. The first is: “A selection of Nigerian Folktales: Themes and Settings” It is a 787-page book with   700 tales including those on  the fisherman,  fortune,  friendship, heroism, magic, the hunter, morals, palace, the trickster, war, marriage  and old women.

The second is: “ People, Animals, Spirits and Objects”   a 939-page  book which contains one thousand folk stories of Nigeria. Both books are published under his “The Treasury of Nigerian Tales (TNT) series which he dedicated to: “all those striving to nurture  the oral tradition; the first school of the child” Usman said his overall aims in the TNT project are: “To collect  for preservation, tales, as the age old oral tradition of telling such stories is fast disappearing; to promote cross-cultural understanding  and mutual respect  for story-telling  and other traditions; to derive  and publish materials  from  local environment that  would educate, entertain  and encourage  the younger generation  to appreciate story-telling ; and to contribute, through morals drawn from the tales, to the moral upbringing of children  as well as the moral regeneration of   the larger society”

In his zeal to create    a  ‘Nigerianity’ in a country whose very existence is constantly   challenged by centrifugal forces   propelled by parochial ethno-religious and greedy elites, Usman has unconsciously turned himself into a book industry.   He retired in 1999 and wrote  20 books within seven years, and has produced more. Bukar Usman  is like Professor  Wole Soyinka and Odia Ofeimum; people who despite the stifling conditions in the country and the suffocating politics, continue to supply Nigeria with badly needed oxygen.

Nigeria can be quite frustrating, but I am happy to share it with people like Usman,   Udenta Onwuamaeze Udenta, who has 21 books from Kraft Books, ready to roll out, and Odia Ofeimun, who each time he gets into a hot argument, fishes out a book he had written on the subject. Odia  has forty published books he is rolling out by March 16, 2020 when he turns 70.  With prodigious intellectuals   like these, who says Nigeria is not   blessed? 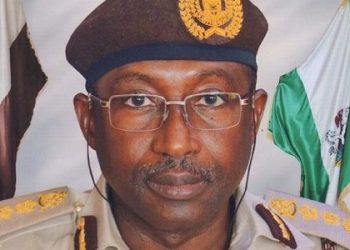