The kingdom of the pastor – Femi Aribisala As a young believer at a Lagos church, I was appalled at the cutthroat politics of the church, all revolving around the pastor. After some time, I found it necessary to confront him. I went to see him, as Nathan did David, and sought his counsel.

I told him I was thinking of resigning from my job because my boss had become a big problem. He knocked heads together, stoked up conflicts, and seemed to thrive only when there was a crisis. We could not get things done the way we should. Under the circumstances, would he suggest I resign and look for another job?

The pastor advised me to resign. He said there was no point in my remaining in the office. He was quite confident I would have no difficulty in getting another job.

Then I turned to him and said: “You are the one.” I told him I was not talking about my office but our church. The church was acrimonious and dysfunctional, and he was principally responsible for this.

Onitsha Christians for Trump and matters arising, By Chido Nwakanma

The pastor was completely taken aback. He listened to me respectfully and promised to make amends. But soon, we were back to square one.

Some weeks later, I embarked for personal reasons on a hundred-day fast. The Lord told me to stop after fifty-five days. During the fast, I was burdened about the church and several things were revealed to me. I decided to share this with the entire church.

As God would have it, I was asked to minister during one of the monthly night vigils, so I mounted the pulpit and told the church everything that had been revealed to me. It was a strange service because the Lord confirmed his word with signs. The anointing at the service was electric. If I merely breathed into the microphone, some of my listeners would fall to the ground. When I decreed healing, God established it.

The Lord had me minister to all those who were there, and he gave me secret details of the lives of every single one of them which I shared with them individually and personally. The very first person was the most dramatic. I stood in front of an elderly man and knew instinctively he was covered in Juju. The Lord asked me to give him the microphone so he can confess to the entire church what he had done and where he had been.

The man confessed that he had been to a Babalawo seeking protection. As a result, he was covered with “protection.” The Lord told me to remove this false covering with my bare hands and warn him never to return to the juju man: “Those who cling to worthless idols forfeit the grace that could be theirs.” (Jonah 2:8).

But by the following Sunday, there was uproar in the church. The pastor was in something of a quandary. He had been fully briefed of the miracle service during the night vigil. However, the revelation God gave me was that he was the principal troublemaker in the church. God’s decree was in no uncertain terms. The pastor had to repent or perish.

Rather than accept the rebuke, the pastor opted for a face-saving response. The decision was taken to inform the church that I must have been suffering from demonic possession. A group of people was asked to conduct deliverance on me in an upper room. But when they did, I confounded them by becoming drunk in the spirit.

I was then summoned before a group of church elders who wanted to know why God would choose to talk to a spiritual novice like me.

One of my inquisitors was the very elderly man who the Holy Spirit had revealed was covered in witchcraft during the service. Although he had confessed at the time that he had gone to the witch doctor for protection, he now insisted that I must have also been demonically inspired. He wanted to know how I got his privileged information. “Why,” he asked, “would God talk to a nobody like Femi Aribisala?”

I offered a simple solution: “Let us fast and pray for three days and God will confirm the same things by revelation to others.” The chairman of the elders’ group agreed with my suggestion. It was resolved that we should all fast for three days and see what the Lord would reveal. But someone quickly rushed to the pastor to inform him that it had been decided that we should go on a fast.

Therefore, the pastor crashed the meeting and declared that no one in the church could fast and pray without his permission. I protested that it was a bit strange that a pastor would prevent people in a church from fasting and praying, but he effectively overruled me. The fast was canceled.

Thereafter, I was treated like a leper in the church. I was serially attacked by the pastor and his allies every so often from the pulpit. My first reaction was to leave the church, but the Holy Spirit prevented me from doing so. Instead, he directed that I must attend every church activity without fail and without exception, including all the mid-week services.

This was most uncomfortable because the attacks did not let up. Someone taking bible study would stop mid-stream and ask the church to pray for Femi Aribisala “so that demons would stop disturbing him.” The Holy Spirit would tell me to get up, go to the aisle, and kneel. Church-members would then stretch out their hand towards me and cast imaginary demons out of me.

This went on until the next monthly vigil. This time, the pastor took no chances; he decided to minister himself. But some thirty minutes into the prayer-meeting, the Spirit of the Lord took control of the daughter of one of his allies. She seemed to be in a sort of a trance, and she started to prophesy.

Seeing who it was, the pastor stopped the proceedings. He handed over the microphone to her and received the shock of his life. The Lord started speaking through the lady and he was rebuking the pastor for all his shenanigans in the church.

When the woman finished, another lady asked for the microphone. She reminded the pastor that she had been in his office that morning at the instance of the Lord to tell him the same things. The Lord had told her that, if care is not taken, very few people in the church would inherit eternal life.

The pastor retrieved the microphone in tears. He pleaded with us to forgive him and promised to make amends. He said again and again: “You won’t go to heaven without me.” It sounded like he would not allow us to go without him. How, I wondered, was he going to stop us?

However, by the very next Sunday service a day later, the pastor had changed his mind once again. He came to church this time in full regalia, which was rather unusual. He had on the cloak, the cap, the whole nine yards of the pastorate.

“Nobody,” he declared, “is going to take this church away from me.” 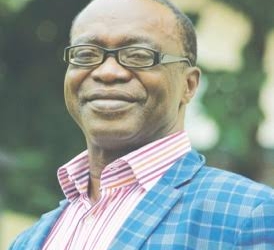 Onitsha Christians for Trump and matters arising, By Chido Nwakanma

Walking by faith and not by sight (1) – Femi Aribisala

Subsidy removal 2020 and the end of organised labour - Dele Sobowale