by Femi Ajasa
in Columnist, Editor's Pick
Reading Time: 4 mins read
A A
0

It was the biggest gamble to merge Power, Works & Housing into a humongous Ministry in 2016 following the emergence of President Muhammadu Buhari. A more focused nation would never dare that. It was clearly an unthinkable thing to do. No nation still wallowing in the throes of development would attempt to place the most critical sectors of its economy under the control of a super minister. It is akin to laying all one’s eggs in one basket! What it means is that if the minister failed, the entire nation would ultimately fail in all these important indexes of development. Even the developed nations with perhaps lesser risks to take would not attempt it. If the thinking was to curtail the administrative overhead of running these key ministries separately, it follows that the magnitude of the resultant failure now staring the nation in the face has been more monumental not only on the economy but also on Nigerians generally.

Give it to him, Babatunde Fashola was an excellent performer as governor in Lagos which probably informed his being given this portfolio but like most Nigerians am yet to see a commensurate performance as minister in charge of the consolidated ministry. Instead, it has been baskets of excuses why Nigerians are not enjoying reasonable power supply. Most times, Fashola speaks on power situation in the country; his oft bloated assessment is starkly different from the reality on the ground.

As I write this piece, my area has been in darkness for three days not because the transformer has broken down but for reasons that only EKEDC can adduce. Not all of us have the resources to run substations called generators throughout the dreadful night transition period. It is no longer news that mains power is now the ‘standby’ source of power in many homes and offices and no longer generators. Most Nigerians put off their generators between 12 midnight and 1am and resort to the use of rechargeable lamps and fans. Because they have worked for long spells of time longer than they were meant for, the rechargeable lamps soon lose their brightness and the fans go off exposing the ‘inmates’ to heat and mosquitoes. At that point, it is very difficult to sleep but to wish that the day break would come quicker than before. This is a routine experience of most Nigerians that clearly indicate our terribly poor quality of life. But what are governments meant for? I would never stop praying for better leaders!
Kudos to the Chinese, a country with a monstrous population about ten times ours who never stop to think and create a better world for hapless societies like ours that cannot invent even the most basic things. We eagerly look forward to when the Chinese shall come up with rechargeable refrigerators and even air-conditioners.
But electricity supply in my area has never been this bad. Before now, we took consolation in the fact that though we were denied during the working day hours, most nights it would come and we could sleep with it till the following morning. Now they would rather bring it for few hours, 2 or 3 of the day and that is all for the whole day. Now, we are counting days, not sure when it will come again.

Some energy statistics running currently in the social media credited to African Outlook of power generation in certain parts of the world would clearly show that the so called giant of Africa is still light years away from true civilization. India with a population of 1,339,000,000 generates 1,368,000,000MW with power to population ratio at 1.022, USA with a population of 320,000,000 generates 4,324,000,000MW with a power to population ratio of 13.513 and the UK with a population of 67,000,000 generates 338,000,000MW with a power to population ratio of 5.045. Nigeria with an estimated population of 180,000,000 generates 5000MW accounting for power to population ratio of abysmally 0.000027. Any little wonder why the country stagnates, the economy is down and teeming population are unemployed. Power supply is the catalyst of any growth in a country. The industrial revolution in Europe was driven on power from coal. Today, they are advanced and their citizens have all the comforts. What values are politicians or indeed democracy adding to the fortunes of the country? Is it just to enjoy the spoils of office and abdicate the responsibilities? What a shame.
Like several other matters choking on the front burner of our polity, the federal government-past and present have not done enough to exorcise the abiku called electricity supply. The reforms brought in were cosmetic and not deep. The Discos cannot distribute what they do not have; generation is still largely the problem though there is barrage of other problems. Often times, the solution to our problems stare us right in the face but lack of political will makes us to jettison them. The present structure is one glaring example. Power, Works and Housing are three key, troublesome sectors that would galvanize the growth and development of this country. Each of them has enough problems of its own and to have merged them is to multiply these problems by three and to commit them into the hands of one minister to solve. The minister cannot give adequate attention to the needs of each of them. Focus is not guaranteed either. Why are the Independent Power Projects (IPPs) not working out? To underscore the urgency of the situation, a state of emergency would have been suggested but has this ever made a difference? Fashola has too much on his hands to manage these ministries together as one. Besides, what is a lawyer doing in power sector? Do you have non-lawyers managing the Justice Ministry or non-doctors the ministry of health?

Power sector needs a dedicated minister who is a specialist and has very good knowledge of the workings of the system. He would understand the challenges and be able to navigate a road map for their solution. Power sector needs a minister who can make it his focus of attention. Power sector once had Prof. Barth Nnaji and he was not doing badly but continuity broke up. Where are the Philip Emeagwalis of this country that we exported to the world? There are lots of competent Nigerians who can head that Ministry and do the needful but politics should be kept out of that place. If not, we cans get expatriates to do it for us with a clear mandate; there is no shame in that. Politicians should cease seeing the power ministry as their cash cow. They should let Nigerians enjoy the dividends of democracy for once. The multiplier effects of stable power supply would reduce criminality, youth restiveness and even terrorism because most of those who involve in these vices would be gainfully employed. As Buhari warms up to mount the saddle for second term, barring the outcome of the appeal filed by his PDP rival, Atiku Abubakar, Nigerians collectively ask him to break up the present humongous ministry and get power a separate minister who will get Nigeria out of darkness in record time. 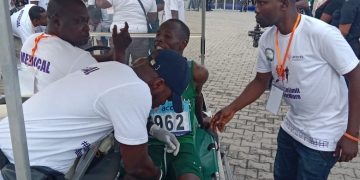