War against corruption: Who is standing against Buhari – Godwin Etakibuebu

by Femi Ajasa
in Columnist, Editor's Pick
157
SHARES
1.2k
VIEWS
Share on WhatsAppShare on FacebookShare on TwitterShare on LinkedInShare on TelegramSend as Email
ADVERTISEMENT

After reading President Muhammadu Buhari lamentation speech on Saturday August 30, 2019, at the passing-out parade of the Economic and Financial Crimes Commission [EFCC]’s Superintendent Course 8, from the Nigerian Defence Academy in Kaduna, I was moved very close to tears. Why was l that moved?
The speech, in my interpretation, must have come from a man [the President] so much frustrated in his genuine efforts to win a war – in this case, the war against corruption. A keen listener to the speech; which was read on his behalf by the Secretary to the Government of the Federation [SGF]; Boss Mustapha, would see the agony of Mr President. And the SGF did a very good work, as a worthy representative of the President, as his voice was over-taken by frustrating emotion when he got to the point of lamentation in the speech. Listen to what the President said.

The President lamented that corruption had retarded development as well as dented the image of the country in the world. The President called on the Economic and Financial Crimes Commission to redouble its efforts in the war against corruption in the land.

Did you hear the President’s lamentation on the subject matter? He did not stop there as he introduced a fresh challenge of mandate into the narrative, to remind the EFCC, in case it has forgotten its original brief on the assignment at hand.

“As part of efforts to boost the war against corruption in Nigeria, the Economic and Financial Crimes Commission has trained a total of 328 new investigative officers at the Nigerian Defence Academy. The training is to prepare them adequately ahead of their deployment as anti- graft investigators across the country.
This government will ensure that every corrupt person is brought to justice.”
Let us do some interrogations of this lamentation, with the hope that we might be able to help our President out of his dilemma. In embarking on this exercise – of interrogating the president’s regrets; which l shall call “voyage of discovery”, we should be assuming quite a number of few things. And those things need to be spelt out.

One, we are assuming, and correctly too, that the pain the President carried in his heart, which clearly showed out in the speech, is our collective pain also. In assuming this vicarious responsibility, we are on the path of totally aligning with President Buhari in saying that whatever and whoever is fighting and limiting him in the prosecution of good governance is fighting all of us. It is an assumption based on the fact that the enemy, albeit genuine enemy [not imaginary enemies which officials of present government are creating out of anyone with different opinion from that of government] of our president that hinders him from achieving tangible results, is our enemy. I hope President Buhari’s government and its dangerously increasing circle of sycophantic officials understand this patriotic responsibility of the Nigerian citizenry.

Two, it is safe to conclude, by listening to his speech quoted above, that the President understands the fact that the battle against corruption is being lost by his government. He must have equally realized that if this battle is lost, he would be heading to that dangerous zone of losing the war [yes, there is a glaring difference between losing a battle and losing a war because there are many battles in each given war]. Muhammadu Buhari knows that the greatest factor of attraction that gave him the presidency in 2015 was his vow to tackle corruption head-on. He dare not lose it [the battle against corruption] ipso facto.
Three, in crying out so loudly, it is safe to come to the conclusion that he needs help to reinvigorates and sustains the battle in a way that might steer him towards winning path.

Four, given the way he cried out in Kaduna, he was not only expressing his fear for failing but has adequately expressed his fear about the continued loyalty of the EFCC in delivering on its mandate in this war against corruption.

Six, and this is almost above all other factors, he is now very much aware, more than ever, that there is somebody or some people somewhere, very close to him; people that might even be running the affairs of his government on his behalf, with the sole aim of seeing him a failure in the battle/war against corruption.
There are more deductible fear-factors we can point out from his lamentation speech in Kaduna but for now, let us run with these few. It is the reason of helping the President out of his dilemma that we should be going for one, and only one assignment, to wit: identifying this mighty enemy standing on the way of President Buhari against winning the war on corruption. We just need to carry out this onerous assignment for two reasons.

One, it shall be wickedness on our path if we fail to help our own President, who cried out to us for help, at this hour of [his] need. In other words, the man would have died in us at a time of tyranny, in the words of Wole Soyinka – our own Nobel Laureate, if we fail as a people to rise up to this challenge
Two, if we fail, either deliberately or as a result of ignorance, or for whatever other reason, to come to the rescue of the President, we shall be doing that to our collective doom. His failure, we must admit genuinely, is our failure while his success is our success, because collectively; either by design or default, we have put our future into his hands for the next four years. And what he does with this mandate, within the next four years could make or mar our future into the next 50 years.

It is for this reason that l am submitting a motion for adoption of all Nigerians, except maybe, the few hawks we loosely called The Cabal; the very few notorious ones the wife of the President herself – Aisha Buhari – cried out a few years ago of having taken her husband and the government hostage [I remembered her challenging Nigerian men to rise up and rescue Nigeria from them], to identify this person standing the way of President Muhammadu Buhari in his intense war against corruption. Our President must not fail!

By default in appointment of people into positions of authority in Nigeria and deployment of some government official by President Muhammadu Buhari, the actual person standing against the President is the President himself. Permit me to explain in just few lines of words but with most practical terms of example.
Our dear President once defended General Sani Abacha; Nigeria’s former Military Head of State [who died in office] against allegation of corruption and looting the Nigerian people’s common wealth. Yes, President Muhammadu Buhari defended the man astutely with all his strength and vigour. It became real irony of fate that when the loots of the same Abacha; adventure he successfully prosecuted as Head of State, were gathered all around the world and same returned back to Nigeria [through the generosity of the civilized world] our President was the one that signed the Executive Order of how the returned looted wealth should be used for benefit of Nigerians.

The return of Abdulrasheed Maina; an alleged notorious Pension Fund looter, dismissed from the Federal Civil Service by the Government of Goodluck Ebere Jonathan; for the reason of the loots, back to the same Nigerian Civil Service, remains an identifying instrument who the enemy of Mr President against the battle of corruption is. And who would you say is the enemy?

Then the most recent nomination and appointment as Minister of Defense for the Federal Republic of Nigeria of a man, retired two-star General Bashir Magashi, helps in no small measure in identifying the “enemy” against the war on corruption. The Premium Times of August 28, 2019, gave detailed analysis of this man’s proficiency in stealing from the Nigerian State’s till.

The irony of the revelation by the Premium Times on this man, who is now heading our defense ministry, is the fact that his act and art of stealing, the mechanism of his admittance to the stealing when he was caught, cum his plea bargain [if we should call it so] and the capacities of those that caught him: Olusegun Obasanjo as President and then National Security Adviser to the President – Major General Abdullahi Mukhtar, working with the successful Swiss lawyer; Enrico Monfrini, are properly documented and remains available property of any Nigerian President, including President Muhammadu Buhari.
Why the President may have chosen to follow this path of sending the wrong signal through his action may not be known to majority of Nigerians. Ipso facto, too many Nigerians therefore would not be hesitating to hold President Buhari responsible as the enemy against the battle on corruption.
Is that your conclusion? Who would blame this conclusion? Will the President help us by purging himself from this conclusion? It is only him that can change the narrative. 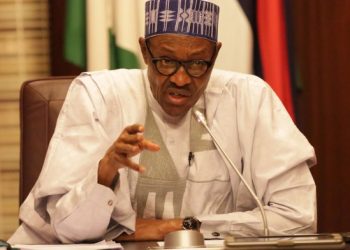