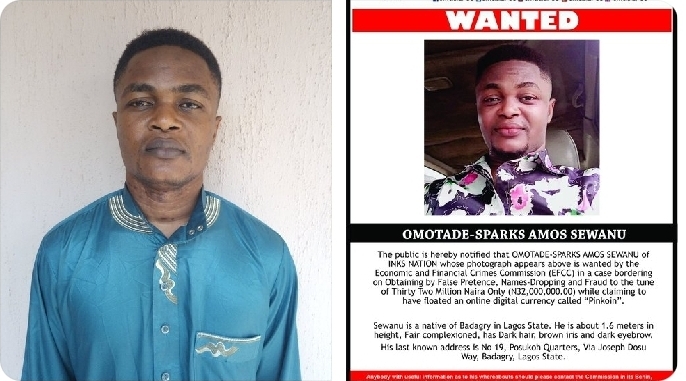 The Economic and Financial Crimes Commission (EFCC) says it has arrested a Lagos State based ponzi scheme operator identified as Omotade-Sparks Amos Sewanu.

According to the EFCC, the suspect, who operated the Inks Nation Ponzi Scheme, was arrested in Sokoto State by the zonal office of the Commission in the State.

“The suspect who had been at large, was finally arrested on Thursday May 27, 2021 and has made useful statement,” the EFCC stated.

TNG reports Sewanu was declared wanted by the EFCC in a case bordering on obtaining by false pretence, names-dropping and fraud to the tune of N32 million while claiming to have floated an online digital currency called “Pinkoin”.

He fled No 19, Posukoh Quarters, Via Joseph Dosu Way, Badagry, Lagos State for Sokoto after the anti-graft agency declared him wanted.