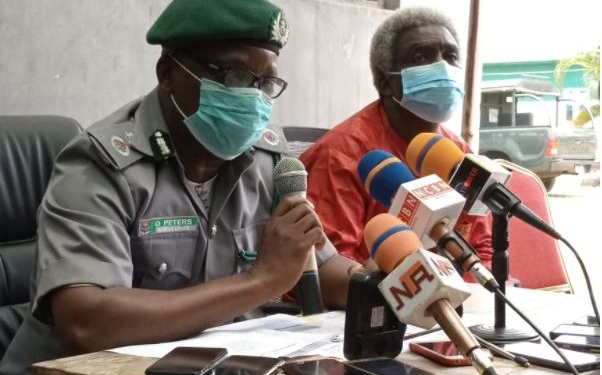 The NCS has also handed the banned substance to the Nigeria Drug Law Enforcement Agency (NDLEA).

Comptroller Olugboyega Peters of the WMC said at a news conference on Friday in Lagos that the command also intercepted other items such as rice and bales of clothing with a DPV of N687, 446 000, in the first quarter of 2021.

According to him, in 2020, the command seized over 10 tonnes of cannabis sativa (marijuana) valued at over a billion naira. 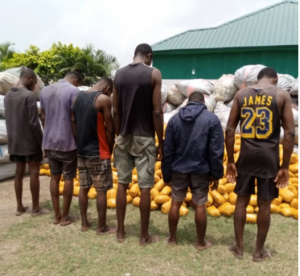 “Here we are today showcasing another feat of arrest of marijuana by officers and men of the command.

“This is together with six suspects, as empowered by Customs and Excise Management Act, Laws of the Federation of Nigeria, 2004, as amended.

“The goods together with the suspects were brought to WMC.

Peters said that WMC had collaboration with the NDLEA, adding that NCS handed over the marijuana and the suspects to NDLEA in the interest of national security.

He said that the United Nation Office on Drugs and Crime (UNODC) headed by Miss Siji Song had on March 16, in fulfillment of its promise of installing Teleconferencing CISCO WEBEX equipment, handed over the equipment to the command.

He said that the equipment would aid operations of the command and assist security agencies in fighting piracy in the maritime industry.

“The equipment will be fully installed when all the enabling tools are put in place by the service,” he said.

Peters said that making the society free of drugs abuse was a collective one, urging that all hands should be on deck to achieve the aim.

“You can imagine the havoc the marijuana of this magnitude could have caused in our society if this seizure has not been made.

“Let me warn unscrupulous elements to desist from smuggling and look for a legitimate means of livelihood.

“Operatives of WMC are always combat-ready to bring smuggling to its barest minimum.

“No amount of distraction will deter us from enforcing Federal Government’s fiscal policies; we will remain resolute no matter whose ox is gored.

“I urge the NDLEA to invite us during the destruction of this marijuana and a copy of certificate of destruction issued to the NCS for record keeping,” he said.

Mr Samuel Gazama, Commander, NDLEA, Apapa Special Command, Lagos, said that the cannabis intercepted was the type being cultivated in Ghana which, he said, was more potent than the one grown in Nigeria.

He said that the seizure saved Nigeria and its image.

“We want the media to help to sensitive the public on the dangers of what we are trying to stop in our society.

“On behalf of the Chairman of the NDLEA, retired Brig.-Gen. Buba Marwa, we thank the WMC and the controller-general of customs for the new leaf of synergy and cooperation that is really coming up between customs and NDLEA.

“Even if we do not have the suspects, the fact that NCS was able to stop this from going into the society, is a big achievement, and I say thumbs up to you and your men.