by Bartholomew Madukwe
in Crime Watch, News
Reading Time: 3 mins read
554 6
A A
0 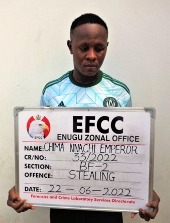 The Enugu Zonal Command of the Economic and Financial Crimes Commission, EFCC, on Wednesday, arraigned one Chima Nnachi Emperor before Justice V.N Nwancho of the Ebonyi State High Court.

The defendant allegedly collected the sum of N36, 105,000(Thirty-Six Million, One Hundred and Five Thousand Naira) from one Chinyere Isaac Ibiam to process a Bureau De Change License but converted it to his personal use.

The charge against him reads, “that you, Chima Nnachi Emperor between the 7th day of October,2021 and 27th day of October,2021 in Afikpo ,Ebonyi State within the jurisdiction of the Ebonyi State High Court of Nigeria , received and converted to your personal use the sum of N35,000,000 (Thirty-five Million Naira),property of Chinyere Isaac Ibiam trading under the name and style of Jeckbold Production and you thereby committed an offence contrary to Section 383(1) of the Criminal Code Law , Cap 33 Laws of Ebonyi State of Nigeria 2009 and punishable under Section 390 of the same Law.”

In a related development, a 22 years old internet fraudster, Bike John Niye has been sentenced to one and half years imprisonment by a Lagos State High Court sitting in Ikeja, for defrauding one Laura Wallmam of Indiana, United States of America the sum of $53,500.

TheNewsGuru.com (TNG) gathered that Niye presented himself to Wallmam as businessman who operates a ‘moving’ company and needed money to get some of his goods out of storage.

He met Wallmam in a dating site and has been in a relationship with her using a fictitious name, Toby Encore.

His journey to prison began on May 27th, 2010 when officials of the National Drug Law Enforcement Agency, NDLEA and DHL Courier Services intercepted a suspicious parcel containing a Teddy Bear and a Blackberry handset sent from the USA to the convict by Wallmam.

The parcel was examined and it was discovered that it contained the sum of $40,000, a Blackberry handset, and a white lady’s photograph concealed in the Teddy Bear. The parcel was to be delivered to an address in Alapere, a suburb of Lagos with the name Tobi Encore and a Nigerian phone number also belonging to the same recipient.

With the phone number, the convicted fraudster was traced and upon finding him, he was handed over to the EFCC for further investigations.

Upon investigation, Operatives of the Commission discovered that the name Tony Encore was used by the fraudster to deceive the American in order to defraud her.

It was gathered that his real name is Bike John Niye.

The operatives also discovered that it was Niye who instructed the victim to conceal all the items in a Teddy Bear.

Investigations also revealed that Niye has been receiving various sums of money from the victim via Western Union totaling about US$25,000 before the parcel which finally landed him in jail.

To enable him collect the sent funds via Western Union , findings revealed that Niye obtained a Driver’s license with a forged identity bearing the name Nathan Omarkeh.

TheNewsGuru.com (TNG) learned that he usually destroys the identity card after collecting money sent to him.

In addition to the one and half-year jail term, Niye is to refund the sum of $48,500 as restitution to the victim.