FACTCHECK: Did Hushpuppi commit fresh $400,000 fraud from US prison?

by Oghenekevwe Uchechukwu
in Crime Watch
Reading Time: 2 mins read
A A
0 Nigerian Abbas Ramon arrested for fraud by the FBI in 2020.

The media was awash with news on Thursday that a popular Nigerian Instagram celebrity Abbas Ramon, also known as Hushpuppi, who is currently in US detention over fraud charges had laundered over $400k from prison.

The circulated document had claimed that the Federal Bureau of Investigation through its agent Andrew John Innocenti, presented documents before the United States District Court of California on Wednesday with fresh evidence indicting Hushpuppi for fraud.

It accused the celebrity of committing fraud and money laundering of Economic Impact Payment (EIP) debit cards fraudulently obtained from stolen data of US citizens and residents while in detention.

The document further said that US prosecutors informed the court that inmates were allowed limited access to phone calls, video calls, the internet and computers without monitoring, adding that Hushpuppi also enjoyed this privilege like other inmates.

HOW TRUE IS THIS CLAIM?

There is no legal prohibition against restricting inmates’ telephone privileges and federal courts have held that inmates have a First Amendment right to some level of telephone access.

The court of appeals for the ninth circuit held that pre-trial detainees and prisoners retain no statutory or constitutional right to privacy in their outgoing phone calls.

Companies such as JPay and Securtech install and maintain phones and kiosks in prisons for the inmates to use, but these systems are monitored. According to law, the only one type of communication exempted from monitoring are those with an attorney (attorney client privilege).

Although, the content of the document on Thursday claims to have “new information involving Abbas”, the U.S. Attorney’s Office in Los Angeles, which filed the initial fraud case against Abbas said it did not file any new charge.

The Director of Media Relations, United States Attorney’s Office (Los Angles) Thom Mrozek, in an inquiry sent by PremiumTimes on Thursday, distanced both the attorney-general’s office and the Federal Bureau of Investigation (FBI) from the fresh allegations against the Instagram celebrity.

In addition, an American cybercrime expert Gary Warner, said some scammers were behind the viral report which is a doctored version of a June 2020 affidavit, adding that the edited document was intended to get people to visit a scammer website.

The circulated document alleging fresh fraud case against Hushpuppi is fake and intended to draw traffic to a scammer EIP website. 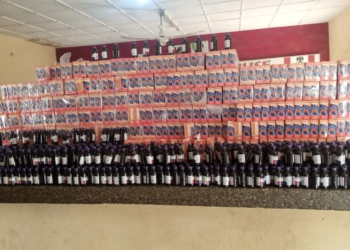