by Bartholomew Madukwe
in Crime Watch, News
Reading Time: 2 mins read
578 6
A A
0 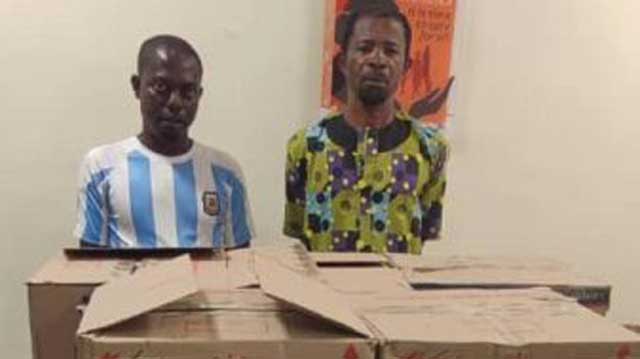 A 17-year-old teenager has been arrested by the police in Lagos, for stealing, two days after he regained freedom from the prison.

TheNewsGuru.com (TNG) gathered that the teenager had spent two years in prison.

According to the Police Public Relations Officer, Benjamin Hundeyin, while sharing videos of the teenager explaining himself, stated that the lad had just completed two years sentence for his involvement in cult activities, and two days after he got freed, he broke into someone’s house to cart away valuables.

The tweet reads:“This 17 year old was released from prison two days ago after doing two years for cultism. Yesterday, he broke into someone’s house to cart away valuables. 🤦‍♂️ What exactly are we getting wrong? NB: His lips…he had scuffles with neighbors who apprehended him, not the Police.”

In another development, the National Drug Law Enforcement Agency (NDLEA) has intercepted 10 cartons of tramadol 225mg with an estimated street value of N200 million in Lagos.

The Director, Media and Advocacy, NDLEA, Mr Femi Babafemi, said this in a statement on Sunday in Abuja.

Babafemi said the consignment was packaged as “tramaking” containing 500,000 tablets with a total weight of 407kg.

He said the illicit drugs were seized during a joint examination with the Nigerian Customs Service (NCS) at the NCS warehouse.

He added that the consignment had arrived Skyway Aviation Handling Company (SAHCO) import shed since June 6 from India via Ethiopian Airline.

He also added that it was eventually transferred to the NDLEA by Customs on June 15.

“The previous day, June 14, a similar joint examination with Customs at the Customs enforcement terminal, Tincan seaport, Lagos led to the seizure of 33 parcels of cannabis indica (Colorado) weighing 16.5kgs.

“The drug exhibit was recovered from a 40-foot container, TRHU 7874497 containing four vehicles.

“The cannabis coming from Montreal, Canada was discovered in three out of the four vehicles in the container,” he said.

He said the drugs, which were locally concealed in cornflakes packs and body cream containers, were to be exported to Malaysia and Australia respectively.

He said the drugs were seized at Murtala Muhammed International Airport (MMIA) Ikeja, and a courier company in Lagos respectively.

“As a result, two freight agents; Nneji Anoma and Etoh Barnabas, involved in the bid to export nine parcels of methamphetamine were arrested on June 15.

“The drug, which weighed 1.45kg, was hidden in packs of cornflakes to Malaysia through the Nigerian Aviation Handling Company (NAHCO) export shed of the MMIA.

“Operatives of the Directorate of Operations and General Investigation, (DOGI) at the agency attached to a courier company also intercepted a kilogram of methamphetamine concealed in body cream containers heading to Australia,” he said.

Babafemi quoted the Chairman, NDLEA, retired Brig.-Gen. Buba Marwa as commending the officers and men of the MMIA, DOGI and Tincan for the arrests and seizures.

2023: INEC faces pressure over candidates not produced by primaries