by Bartholomew Madukwe
in Education, News
Reading Time: 3 mins read
A A
1 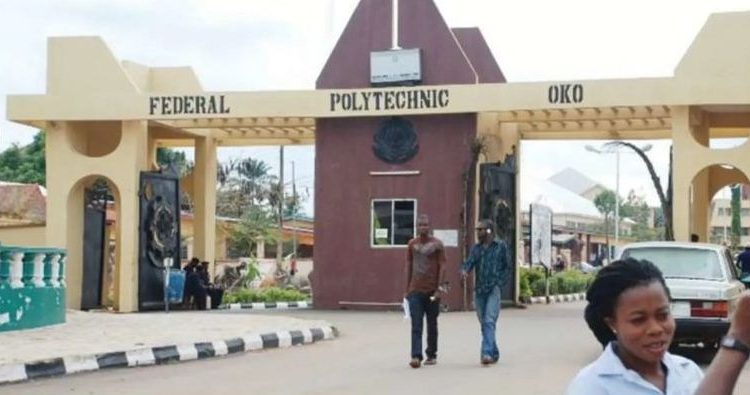 The deceased, whose identity was yet to be ascertained, was said to be undergoing his Industrial Attachment (IT) preparatory to graduation when he was jilted by his lover.

A student of the institution, Orji Ikechukwu, described the deceased as an intelligent student who was full of life and energy, adding that his grade point was close to distinction.

Orji said: “He’s currently in his IT days, a student of Public Administration. He decided to stay in Oko for his one-year industrial training, (but) instead of focusing on his training he decided to search for true love.

“His girlfriend recently broke up with him and the news devastated him, and on Friday, when he could no longer endure it, he drank a brand of insecticide and died.”

However, the Public Relations Officer of the institution, Mr Chijioke Ibeziakor, said he was not aware of the incident.

TheNewsGuru.com (TNG) recalls that the institution had earlier won the 2022 top-performing Cisco Networking academy award for the 4th consecutive time.

The prestigious Cisco award to the Federal Polytechnic Oko was in recognition of the institution’s outstanding performance in curricular excellence and academy growth.

Interestingly, the Rector of the institution, Engr. Dr. Francisca Unoma Nwafulugo also emerged the 2022 Cisco Rector of the year for her passion and commitment to digital skills and entrepreneurship development.

For this feat attained by Fed Poly Oko, Cisco Networking Academy, which is a global Information, communication and technology education program, gifted the institution with CCNA equipment which comprised of two Cisco Routers and Switches valued at N3. 5 million.

“We also recognized the Rector of the institution, Engr. Francisca Nwafulugo for her passion and dedication to the Institution’s continuous commitment to curricular excellence and contributions to the future success of Networking Academy students”

Akpan also commended the dedication and passion of the Institution’s management team and instructors to the success of the program.

Fielding questions from journalists after the presentation, the General Manager, Mr. Akpan further explained that Cisco Networking Academy is a career building program for learning institutions and individuals worldwide, adding that Cisco Networking Academy has changed the lives of 15.1 million students in 180 countries in 24 years, by providing education, technical training, and career mentorship.

“Many graduates have achieved successful ICT careers in a variety of industries, while others have harnessed the entrepreneurial spirit and knowledge they acquired in Networking Academy to start their own businesses and create new jobs.

“The program” according to him, “transforms the lives of learners, educators and communities through the power of technology, education and career opportunities. Cisco Networking Academy is the world’s largest classroom, bringing tech education, 21st-century skills, and improved jobs prospects. With over 12,000 academies across the globe, Networking Academy helps individuals prepare for industry-recognized certifications and entry-level information and communication technology (ICT) careers in virtually every type of industry.

In appreciation, the Rector, Engr. Nwafulugo commended the ICT Giants for their transparency, expressing joy that her institution beat other polytechnics and universities in Nigeria to emerge top for four consecutive times.

“I am privileged to be surrounded by good people. Our principal officers, deans and directors are all committed people. I want to commend our ICT director, Engr. Ken Nnamani for attracting these goodies for the institution. He is the man behind the mask. He nurtured our ICT academy to maturity”

The ICT director of the institution, Engr Ken Nnamani in turn, commended the school management for the support given to him and his team.

“This kind of recognition has eluded us over the years but we were able to pull through because of the support the ICT directorate often gets from the management,” he said