If you listen to Tiwa Savage’ new song All Over for the first time, without being told she sang the song, you will probably see it as one of those regular songs that litter our airwaves. Tiwa Savage is an A-list artiste and has remained relevant over the years , churning hits, headlining major gigs and becoming an inspiration to other women. It is difficult to sustain stardom and Tiwa has been able to achieve it. Her die- hard fans applaud her, the media feeds on her content, while her critics yearn to analyze anything that pertains to the Tiwa Savage brand.

Tiwa dazed many in 2016 when she returned to the music scene despite her marital controversy and being new to the business of motherhood. Armed with hit songs off her R.E.D album like Adura, Standing Ovation and African Waist, Tiwa regained her kingdom, sitting self-assuredly on her throne.

2017 is a new year , music pundits are wondering what her master plan will be for the year. Her close rivals in the game, Yemi Alade and Seyi Shay have released singles earlier in the year, whetting the appetite of their fans. Our darling Tiwa had a late start into 2017, releasing her first song for the year, three months into 2017. 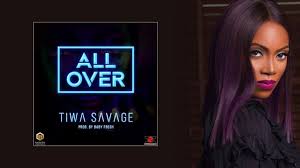 Tiwa Savage’s new song, All Over produced by Babyfresh touches on her familiar terrain of love. Its an high-life song riddled with Tiwa ‘s usual melody,code-switching and progression reminiscent of her song, My darling. Its danceable, groovy but lacks the elements of a good song which includes a strong reaction, arrangement, concept, genre , style and hook. For All Over, the chorus it’s still the only part that stays with you till the end. The lyrics are typical and pedestrian.You will have to listen to it over and over again till it sinks into you. The song won’t necessarily get you grooving on a first listen.