Popular Nollywood actor, Yul Edochie, got social media buzzing when he shared a video of his family’s visit to his dad, Pete Edochie’s home.

Yul broke the internet on 27th April 2022, after sharing photos of his new baby, Star Dike Edochie, with his side chick, Judy Austin, turned second wife.

2nd wife saga: It has not been easy, depression is real – May Edochie

However, following the criticism that trailed Yul’s 2nd marriage, Veteran Actor Pete Edochie has remained silent on the matter.

Just recently, Yul and his 1-year-old son paid a visit to his father’s house and the movie star could not help but share the adorable moment on his Facebook page.

In the video, a very cute grandfather-child moment was captured as Pete Edochie held his grandson. Yul was also heard in the background communicating with his dad. 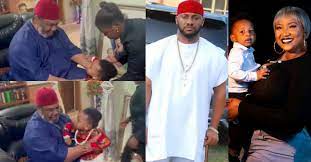 Yul Edochie’s decision to take a second wife seems not to have resonated with his family, especially his father, the veteran Nollywood actor, Pete Edochie,

The actor (Yul) had taken to his Instagram page to welcome a son from Judy, calling her his second wife.

Reacting to the news, his father, Pete banished his son’s second wife from entering his household.

The ace actor made it clear that he does not support his son’s action and that as an Igbo man, who doubles as a statesman, he only recognises his son’s first wife, May. 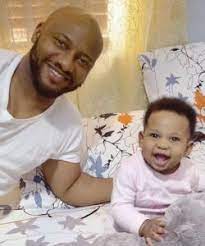 He said: “I want the whole world and Nigerians to understand that as an Igbo man, I never support my son’s actions and as a statesman, I only Recognized his first wife as the only authenticated wife of my son, the rest is banished from entering my household.”

Pete Edochie, also said taking a second wife is an open invitation to anarchy, as he bore his mind that Yul had the second wife and son without his blessing.

He also said that his youngest child, Yul has been independent-minded right from when he was a child and never really listened to him.

“I’m not shocked that he has a son without my knowledge. A child that doesn’t listen to his father ends up cutting his or her life span short” Pete added.