by Bartholomew Madukwe
in Entertainment, News
Reading Time: 1 min read
539 28
A A
0 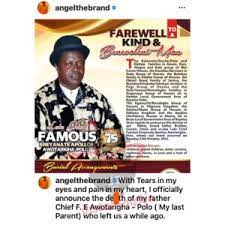 Angel took to his social media to announce the demise of his 75-year old father.

Angel explains why she regrets participating in BBNaija show

Why I dropped out of UNILAG after only two weeks – BBNaija star, Angel

Angel revealed that his late father happens to be his last parent and he has been dealing with the great loss for a while now.

He also added that the burial service for his late dd will be held later in the month of May 2022.

He wrote; “With Tears in my eyes and pain in my heart, I officially announce the death of my father Chief F. E Awotarigha – Polo ( My last Parent) who left us a while ago. Those of you who knew him can testify to his magnanimity, he will be always be missed. Been dealing with great loss for a while now but I am better. Burial is later this month, Rest well Chief!