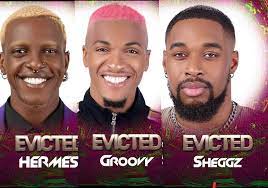 Three housemates of Big Brother Naija, BBNaija, “Level Up” namely Groovy, Sheggz and Hermes were on Sunday night evicted from the reality TV show, as Bella and Phyna suffer heartbreak.

Recall Groovy got into a ship with Beauty at the early stage in the season and when that ship capsized, he went into another one with Phyna.

He has also had standout fashion moments and some outstanding performances during Tasks.

Groovy’s relationship with Phyna was put apart in the way Sheggz and Bella ceased to be in any ship following Sunday’s eviction. 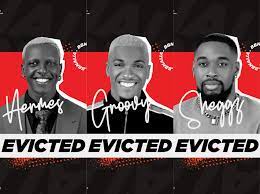 It was a sad moment for Sheggz and Bella as their union in Biggie’s house was terminated abruptly.

Speaking to the show host, Ebuka Obi-Uchendu about his exit, Shegzz said Bella is his baby and stated that only time would tell what becomes of their union.

He had, however, assured his lover, while exiting the house that they would meet soon.

“You know I love you, I’ll see you in the next seven days,” he told Bella.

TheNewsGuru.com reports that on Day 59, Chichi made it to final, saving Bella and Daniella.

In the Head of House games last week, Chichi won and automatically made it to the finale.

She also got the supreme veto power which enabled her to nominate two housemates that would make it to the finale with her. She saved Phyna and Daniella.

Also, she chose Chizzy to share the HOH room with her.

How Chichi helped Phyna and Daniella to BBNaija grand finale

Recall that Sheggz, Hermes, Adekunle, Bryann, Bella, Rachel, Chizzy, and Groovy on Sunday battled to make it to the grand finale of the reality TV show.

Being the week that precedes the finale week, there was no nomination process. However, power rested in the hands of the HoH.

Shortly after the HoH game, Biggie informed housemates that Chichi- the current HoH winner- will automatically wield the supreme veto power of the season.

This means that the HoH will have the power to save two people and give them a spot in the finals while the other housemates will be placed up for eviction.

To prepare for this exercise, Biggie gave all housemates 90 seconds to pitch and sell out themselves to Chichi to help her make a decision.

After the exercise, Chichi saved Phyna and Daniella for the finale, thereby putting the remaining housemates up for eviction.

Since they are both riders, Rachel and Chizzy would not be eligible for eviction- as they are expected to remain in the house till the last day.

The winner of this year’s edition will walk away with the grand prize of N100 million- the highest ever since the inception of BBNaija.