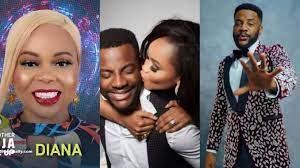 Diana made this known following a question the Head of House, Eloswag, asked the housemates which celebrity they would like to date.

She answered the question and said it would be Ebuka.

Unfortunately, Ebuka Uchendu is a married man with children.

Diana is also a Project Manager from Edo State.

She was born in France but now calls Abuja home.

The BBNaija housemate confirmed in an interview that she is single.

“Guys perceive me as sophisticated, high maintenance and too expensive to approach. When they eventually get to know me, they realize I am actually a very lovable and down-to-earth person,” she said.

Ebuka Uchendu is a Nigerian lawyer and media personality from Okija in Anambra State, Nigeria.

He is known for hosting the reality show Big Brother Naija, the long-running Rubbin’ Minds talk show on Channels TV as well as co-hosting The Spot and Men’s Corner on Ebonylife television.

The BBNaija host is an ambassador for Budweiser Nigeria, Samsung Nigeria, PorkMoney, and 2Sure Nigeria.

He has received several award nominations and won the award for Outstanding TV Presenter of the Year at the Nigerian Broadcasters Merit Awards for his work on Rubbin’ Minds.

Born in Benin City, Edo State to a banker father and a mother who is a nurse, he is the third of four children with an elder sister as well as one older brother, and a younger brother.

He went through with his nursery and primary education in the mid-western Nigerian city of Benin, remarkably passing the Common Entrance Examination into secondary school from Primary Four. He subsequently moved to the capital city of Abuja with his family.

The BBNaija host had his secondary education at Christ The King College Abuja, graduating in 1997, before getting his university education at the University of Abuja, up until 2004.

Ebuka Uchendu proceeded to the Nigerian Law School Bwari, Abuja finishing in 2005 he then returned to school after a 5-year working gap, graduating in December 2010 from the Washington College of Law of the American University Washington D.C., with Master of Laws degree specializations in Intellectual Property as well as Communications law from the Law and Government program.