International  supermodel, Naomi Campbell was a special guest at the Afrika Shrine in Ikeja, Lagos on Thursday night.

The-48-year-old, who was in Nigeria for the Arise Fashion Week, was received at the iconic cultural centre by Yeni Kuti and Femi Kuti.

Her hosts took to social media to share  pictures of her at the shrine .Yeni wrote: “Pix 1 We welcome Naomi Campbell to the Shrine.  Pix 2. A group picture  Pix 3 I hug and peck. Mutual respect  Pix 5. Deep discussions  Pix 6. Selfie time.”

Campbell’s first public appearance came at the age of seven, in 1978, when she was featured in the music video for Bob Marley’s “Is This Love”.

At the age of 12 she tap-danced in the music video for Culture Club’s “I’ll Tumble 4 Ya”.

In 1986, while still a student of the Italia Conti Academy of Theatre Arts, Campbell was scouted by Beth Boldt, head of the Synchro Model Agency, while window-shopping in Covent Garden.

Her career quickly took off—in April, just before her 16th birthday she appeared on the cover of British Elle 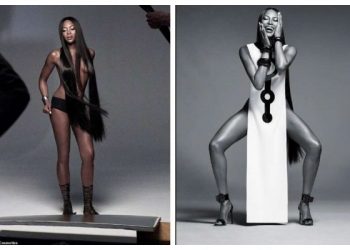