I once had a crush on Michael Essien – Chimamanda

Award-winning novelist, Chimamanda Adichie, has revealed she once had a ‘mild crush’ on ex-Ghanaian midfielder, Michael Essien, after the Ghanaian team defeated the United States at a World Cup tournament which Nigeria did not participate in.

Adichie revealed this in the introduction written for a picture book, Africa― The Future of Football, authored by photographer, Pall Stefansson.

The respected writer shared a video on Facebook where she read the introduction (to the book), with the title, ‘Football Nationalism’.

According to her, she became a Ghanaian after the team caught her attention at the tournament.

I’m an ambassador of myself, I don’t represent Nigeria-Chimamanda Adichie declares

Adichie emphasised the point about how football makes people forget their differences.

“I watched the game (Ghana vs USA) with my best friend, Uju, often shouting and then hugging each other when Ghana finally beat the United Stas,” she said.

“You know some of our boys started playing this game without shoes’, Uju said. ‘Our boys’ were, of course, the Ghanaians.

“A small consequence of that game was my developing a mild crush on the Ghanaian player, Michael Essien, as much for his looks as for his dexterity.

“But the larger and more important consequence was my realisation that sports allowed us, black Africans, to address historical and political grievances in the most cathartic way.” 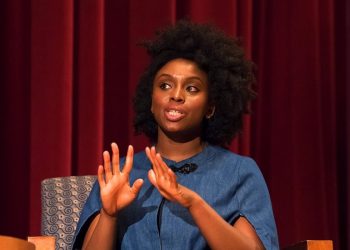 I’m an ambassador of myself, I don’t represent Nigeria-Chimamanda Adichie declares