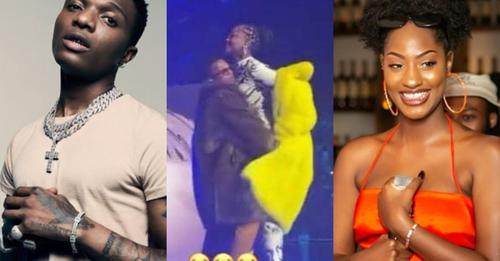 The reactions were in condemnation of a video that surfaced online where Wizkid moved closer to Tems and attempted to carry her by putting his hands beneath her buttocks. Amazingly, Tems quickly removed his hands and continued singing.

As expected, this has triggered a flurry of comments on social media.

Read the comments gathered by TheNewsGuru below:

@Kays_perfume: I’m sure that was a very awkward moment for both parties. What if WizKid meant no harm and maybe was “too” excited. And what if Tems wasn’t offended just somewhat embarrassed or if she was, maybe she misread his intentions. Well. Just thinking out loud

@Wisdomcounsellin: He went too far and she reminded him of boundaries with a smile.

@Madam_landlady: Boundaries!! Set them and stick to them anywhere. Especially in public where many often get carried away! Love that girl

@Callmejedidiah: think he tried lifting her but shy Tems stopped his little muscles before they both come crashing to the floor. It’s not that deep. I get embarrassed when people try to lift me too . I always fight it.