Home » Entertainment » “Madam First Lady, you are not God”- Mr Macaroni reacts to reports of alleged arrest of Aminu

“Madam First Lady, you are not God”- Mr Macaroni reacts to reports of alleged arrest of Aminu 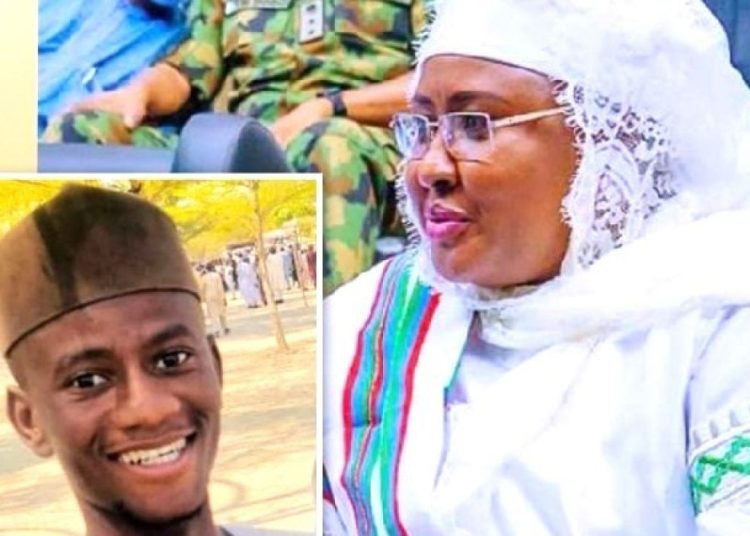 Famous comedian and actor, Adebowale Adedayo, known by his stage name Mr Macaroni, has reacted to reports of the alleged arrest of an undergrad student of Federal University, Dutse, Aminu Mohammed, over a Twitter post where he claimed that First Lady, Aisha Buhari, was getting fat on the money of the poor masses.

The skit maker told the First Lady that she isn’t good, and if any grievances exist over the young man’s tweet, she should take the case to court.

He went on to advise Aisha Buhari to use her power to serve the people and not to oppress them.

FG to monitor development of first babies of the year

Seun kuti calls Aisha Buhari “goat” if she fails to send DSS to him, says “you are fat” (VIDEO)

Mr Macaroni pointed out to her that the past president, Goodluck Ebele Jonathan and his wife, Patience had suffered much criticism from the masses.

He finished off by telling the First Lady to stop abusing her power.

An excerpt from his post reads: “Madam First Lady, you are not God!!! If you have any grievance whatsoever, go to court!!! You are not bigger than the Citizens of Nigeria neither are you bigger than the Law! You should use your power to serve the people not Oppress them! Free Aminu!!!”

TheNewsGuru.com (TNG) reports that the First Lady (Aisha) and the Department of State Services (DSS) are facing criticism over the arrest of a 23-year-old student after a remark on Twitter.

Aminu Adamu, a student of the Federal University, Dutse, Jigawa State, was detained for commenting on Aisha’s weight.

In June 2022, the undergraduate tweeted “Su mama anchi kudin talkawa ankoshi” (The mother has got fatter by eating masses’ money).

Aminu’s friends said the tweet was in protest of the eight-month strike by the Academic Staff Union of Universities (ASUU).

The industrial action infuriated thousands of students so much that they made comments, videos, and organized rallies against the government.

Aminu was arrested on campus around 12 noon on November 8, and was only allowed to speak to his father, Shalele Azare Adamu.

As of Sunday night, Aisha Buhari was trending on Twitter with more than 60,000 mentions as users mount pressure on the authorities to free the student.

Legal practitioner, Inibehe Effiong, said it is petty, ridiculous and unconstitutional for the DSS to hold a citizen for “mockery”.

Effiong insists Nigeria is not Iran, North Korea or China and vowed that reckless abuse of power will not be tolerated.

The rights activist stated that the First Lady (Aisha) should have taken Aminu to court for libel if she felt defamed.

“It is not acceptable to deploy state apparatus in such a draconian and oppressive manner the way Mrs Aisha Buhari has done to settle personal scores. The DSS has no jurisdiction in this case”, Effiong said.

In one of his several reactions on the matter, Investigative Reporter, David Hundeyin quoted a 2013 tweet by the APC United Kingdom verified account.

Noting that the tweet was about a sitting First Lady, David wrote: “The sky did not fall down. So please entirely miss me with anything you have to say. Aisha Buhari’s bullying has not even started.”