Amidst tears, the remains of the late Ekwueme singer, Osinachi Nwachukwu, have arrived in her hometown in Amakpoke Umuaku community, Abia State (around 12:00pm.) for burial.

TheNewsGuru.com (TNG) reports that Osinachi, who died on April 8, 2022, allegedly suffered domestic violence prior to her death.

Until her death, Osinachi, who sang the popular song ‘Ekwueme’, was a chorister at the headquarters of the Dunamis International Gospel Center in Abuja.

Prior to the final internment today (Saturday), a night of worship was held in Abuja on Thursday, June 23 while a Night of Prayer was also held in Isochi, Umunoci in Abia state yesterday, June 24.

Family members of Osinachi accused her husband, Peter Nwachukwu, of domestic violence, leading to her death.

However, the husband of the late Ekwueme crooner denied brutalizing Osinachi to death, stressing that she died of lung cancer.

Following the allegations against Nwachukwu, the police had arrested him and was charged for allegedly committing the crime that contravenes Sections 104 and 379 of the Administration of Criminal Justice Act, (ACJA) 2015, Section 221 of the Penal Code and the Violence Against Persons Prohibition Act (VAPP) 2015.

Speaking at a High Court in Abuja, where he was arraigned, Nwachukwu said he never hit the deceased singer.

“Let me tell the whole world, I have suffered a lot. I have been abandoned. What killed my wife was cancer of the lungs, I didn’t hit my wife. 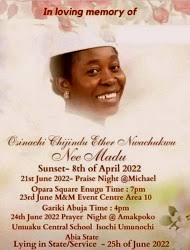 “Cancer of the lungs killed my wife, Osinachi Nwachukwu, so I’m suffering for what I do not know, “ he spoke while being moved from the courtroom.

Nwachukwu was accused of killing his wife following domestic violence he subjected her to while she was alive.

To this end, the office of the Attorney General of the Federation, AGF, had arraigned Nwachukwu on a 23-count charge bordering on domestic violence and homicide.

The Abuja National Hospital had performed an autopsy on Osinachi but the result was handed over to the police.

Meanwhile, the court had remanded Nwachukwu in Kuje Correctional Facility till the end of the trial. 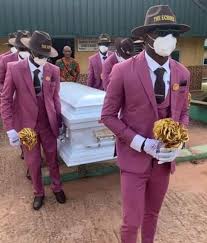 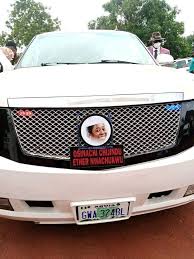