by Bartholomew Madukwe
in Entertainment
Reading Time: 1 min read
11.9k 762
A A
1 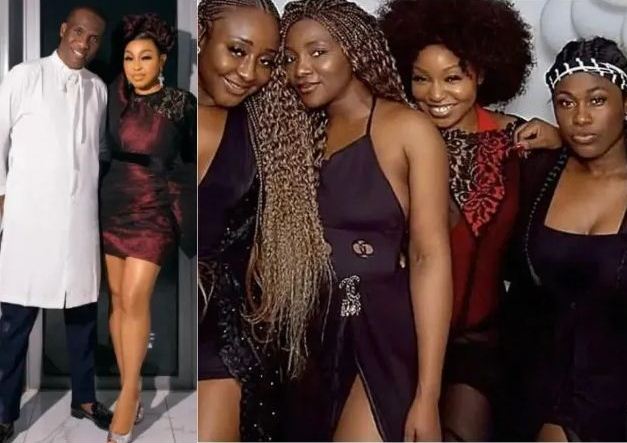 The warning given by Fidelis Anosike, husband of Nollywood actress, Rita Dominic, to her colleagues visiting her, has generated internet comments.

Anosike taunts Ini Edo, Genevieve Nnaji, and Uche Jombo in an Instagram image that appears to be a jest that their buddy Rita Dominic is already taken.

“Marriage is an experi­ence that I don’t regret” – Actress, Ini Edo

Rita Dominic’s friends would have to make an appointment to see her, according to Fidelis Anosike.

He wrote: ‘Girls your friend is Taken Now! Visit her on appointments @iniedo @genevievennaji #reeldeel22‘

Reacting to this, social media users frowned at Fidelis’s attitude and warned him not to come between Rita Dominic and her friends.

joforndu wrote: It has begun isolation strategy (Peter Nwachukwu style) hope this union last shaa….I heard you have had three marriages that has failed I hope this one last, Rita’s family told you this is your last bust stop.

afrihonee wrote: Please don’t be too strict,be natural and liberal That’s the beauty!!!

chizzy_kingz wrote: No be small on appointment oh! @fideliisanosike sir employ me as her PA so I will be incharge of the schedules.