by Ediri Oyibo
in Football, Sports
Reading Time: 3 mins read
A A
1 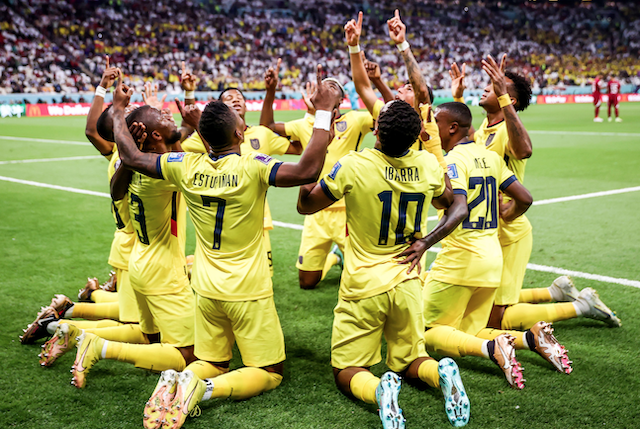 Enner Valencia scored a World Cup record-making goal on Sunday as his two first-half goals led Ecuador to a dominant 2-0 victory over host, Qatar in the opening game of the 2022 FIFA World Cup.

The home nation froze on their big night with an error-strewn display that left them as the first World Cup hosts to lose their opening game.

Valencia, who had already had a third-minute header ruled out by VAR for offside, slotted in the tournament’s opening goal from the penalty spot in the 16th minute after being brought down by nervous-looking goalkeeper, Saad Alsheeb.

Valencia powered home a 31st-minute header for the second and the South Americans then cruised home as an outclassed Qatar struggled to mount any meaningful attack and had only a fluffed header by Almoez Ali to show for their limited efforts.

The other teams in Group A, Senegal and the Netherlands, meet in one of three games on Monday.

The defeat is coming for Qatar after the host’s Bedouin roots, embodied in a tent-shaped stadium, were on display on Sunday as the country’s emir opened the World Cup opening ceremony.

At the spectacular ceremony, he kissed his father’s hand and welcomed the world to soccer’s biggest event, the first time it has been staged in the Middle East.

“From Qatar, from the Arab world, I welcome everyone to the World Cup 2022. How lovely it is that people can put aside what divides them to celebrate their diversity and what brings them together,” Sheikh Tamim bin Hamad Al Thani said.

Then, fireworks exploded from the roof of Al Bayt stadium, 44 km (27 miles) north of the capital, Doha.

Tamim waved to the crowd and leaned down to kiss the hand of his father, former ruler Sheikh Hamad bin Khalifa Al Thani, who abdicated in 2013, making way for his son.

Then the lights dimmed and three camels, dancers and a Qatari singer called “Dana,” who wore a traditional batola, a leather face-covering worn by some women in the Gulf region, filed onto the pitch.

American actor, Morgan Freeman, followed alongside Ghanim Al Muftah, a 20-year old Qatari man who was born with a rare condition that impairs the development of the lower spine.

Freeman sat on the pitch beside Al Muftah.

“How can so many countries, languages and cultures come together if only one way is accepted?” Freeman told the crowd.

“When you call here, we welcome you into our home,” Al Muftah said, referencing the “bayt al sha’ar” or tent that nomadic bedouins of the Arabian peninsula once used for shelter, which inspired the stadium design.

The ceremony featured video footage of Sheikh Tamim as a boy playing soccer in the desert, which seemed aimed at countering the argument made by Qatar’s critics that the Gulf Arab state has no soccer tradition.

The opening of the tournament was the culmination of 12 years of preparations that have transformed Qatar and have also exposed it to a barrage of criticism including over human rights.

Saudi Arabia, the UAE, Bahrain and Egypt had severed ties with Qatar from 2017 to January 2021 over accusations that Doha supported terrorism – a reference to Islamist groups. Doha denied the charges.