by Oghenekevwe Uchechukwu
in Health, News
Reading Time: 2 mins read
A A
0 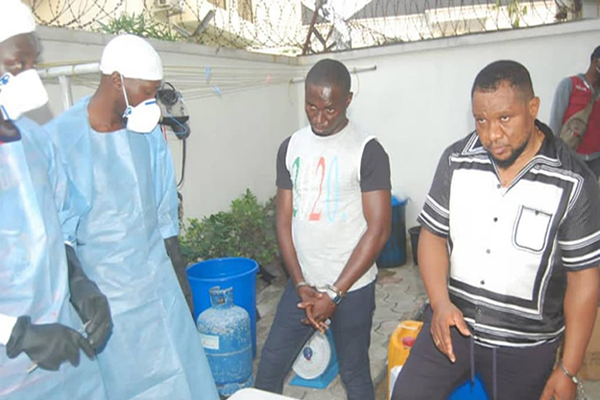 Residents of Victoria Garden City Lagos state have been put at health risk by exposure to highly toxic and dangerous chemicals from a clandestine methamphetamine laboratory located within the estate, which was run by drug baron Emeka Nzewi.

Nzewi, his wife and ‘cook’ Sunday Ukah, who produced the drugs, were arrested by officials of the National Drug Law Enforcement Agency (NDLEA) during a sting operation last Saturday.

The NDLEA said in a statement that Nzewi had exposed all occupants of properties around his residence which doubled as lab, to hazardous chemicals contained in the waste generated from production of crystal meth.

“In this particular case, aside from the laboratory being close to the kitchen of the main house, the waste from the laboratory was channeled into the septic tank and soakaway in the compound, with a high risk of contamination of the water table of the entire neighbourhood,” Chairman and Chief Executive of NDLEA Mohamed Buba Marwa, disclosed on Tuesday.

He said as a result, all boreholes, water supply and plants 500 meters away from house K-5A/2 on Road 14 have been contaminated.

“It is very important to note that the waste from methamphetamine production is dangerous to the ecosystem. The chemicals are toxic and once they seep into the soil, they contaminate the water table from which surrounding wells and boreholes draw their water.

“Citizens who unwittingly consume the water from such sources are exposed to heart and kidney ailments and other organ diseases,” Marwa added.

It was gathered that the laboratory set up inside the Boys Quarter of Nzewi’s four-bedroom duplex, produced 50 kilos of methamphetamine every week and there were plans to scale-up production to 100kg per week.

A total of 258.74 kilograms of crystal methamphetamine and various precursor chemicals used for the production of the toxic drug were recovered from the apartment.

The Agency is working with the Victoria Garden City Property Owners and Residents Association (VGCPORA) to conduct water tests on properties within the estate.

Property Owners do not conduct background checks of tenants before lease of properties. Such act exposes other residents to security risk.

Chairman of the estate Olusegun Ladega said henceforth, VGCPORA will make background checks mandatory for new residents before access cards will be issued or renewed for existing residents.

“VGCPORA has a longstanding commitment to provide a safe, drug free environment. Alcohol and drug misuse pose a threat to the health and safety of VGC and to the security of the community,” Ladega noted.