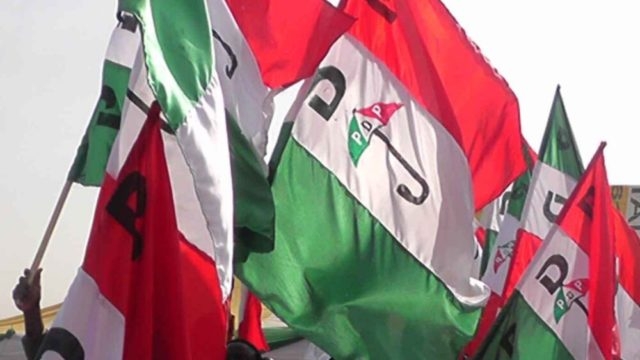 A faction of the People’s Democratic Party (PDP) in Anambra has suspended Mr Okey Asolo, acting Chairman of the party in the state.

Asolo’ was suspended by the PDP ward leadership in Ward 13 Onitsha North Local Government Area which accused him of violation of party constitution and anti-party activities.

Asolo, who took over from Chief Ndubuisi Nwobu as acting Chairman, had on April 2 suspended Chief Chris Uba, a member of PDP Board of Trustees and Chief Linus Ukachukwu, a chieftain of the party.

The notice of sack is contained in a statement made available to newsmen in Awka on Tuesday and signed by Mr Obinna Obialor and Mr Obinna Obichinyere, Chairman and Secretary of the party in the ward respectively.

According to the statement, arising from a crucial meeting of the Ward Executive Committee held on April, 3, the PDP Ward 13 Onitsha North LGA suspended Comrade Okey Asolo.

“His suspension from the Ward is on account of his violation of the PDP constitution and anti-party activities.

The suspension was upheld by the Onitsha North Local Government chapter of the party which met on Monday.

The chapter, in a Communiqué signed by Mr Alex Anah and Mr Chigbo Onyia, chairman and secretary respectively said it deeply considered the notice and came to the conclusion that Comrade Okey Asolo actually violated the provisions of the PDP Constitution 2017 as amended.

“We upheld the said suspension and equally suspended him from the Onitsha North Local Government Area PDP of Anambra State,” it said.

Meanwhile, a group, Forum of Elected Local Government Chairmen in Anambra has dissociated itself from the suspension of Uba and Ukachukwu.

The chairman, who wrote to the national leadership of the party in a communiqué, said Asolo and his group activities were aimed at destabilising the party.

“We dissociate ourselves from this fragment of imagination of Okey Asolo and cohorts purporting to have suspended Chief Chris Uba and Chief Linus Ukachukwu from the PDP.

“By their action, there is no gain saying the fact that their sole aim is to destabilise the People’s Democratic Party.

“Therefore, we urge you members of the National Executive Committee of our party to disregard the purported suspension of the two high profile leaders of our great party,” it stated.

I’m fed up, my husband’s manhood is not functioning – Woman tells court

Our policy made Nigeria, fertiliser powerhouse in Africa – Buhari