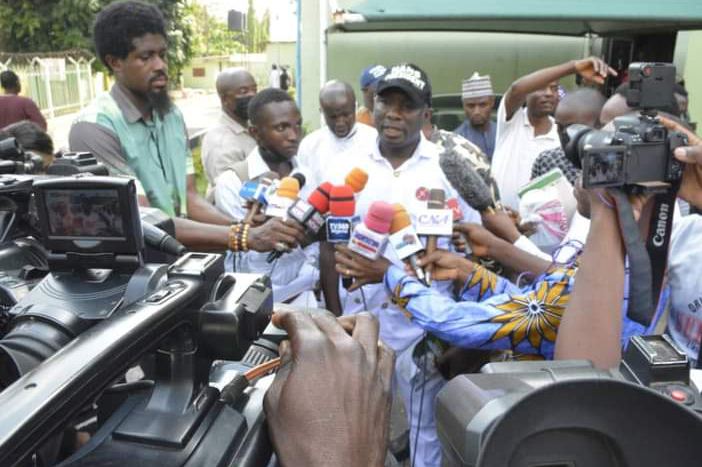 President of National Association of Nigerian Students (NANS), Sunday Asefon has warned the two major political parties in the country, the ruling All Progressives Congress (APC) and the People’s Democratic Party (PDP), against holding political gatherings in Abuja, the federal capital territory (FCT).

TheNewsGuru.com (TNG) reports Asefon gave the warning on Sunday against the backdrop of the ongoing strike by the Academic Staff Union of Universities (ASUU) that has kept Nigerian students at home from advancing their educational pursuit.

Asefon wrote: “I am compelled to write this morning being the beginning of a new month to address the unending ASUU Strike. We have given mediators time to prevail on the Federal Government to resolve issues with ASUU and ensure our students resume to their different campuses but it seems all mediation failed or failing as the case maybe.

“We are surprised by their effrontery and total disrespect to the Nigeria people for having the courage to even mute the idea of contesting talkless of picking up the 100 million naira presidential form while students languish at home because of their collective failures.

“Politicians have shown no concern to the plight of the students but are only busy in their selfish and inordinate ambitions to become the next President.

“Let me say without mincing words, the two major political party should forget any political gathering in Abuja or elsewhere except there is solution to the lingering ASUU strike.

“We will frustrate all the activities leading to selection of party candidates if we remain on strike. We also want to advise the government and the politicians who are busy campaigning to be President to either resolve the ASUU crises or give direct orders to the security operative to shoot us at site during party conventions to select presidential candidate. If we remain on strike, they should just forget it.

“Because they know our plans and how fearless we are while pursuing the interest of the students, we are aware they have bought some acclaimed students leaders with no conscience and no honour to divide us.

“Our advice is very simple, no matter how much any acclaimed student leaders are paid by their paymaster, they should return it immediately because the wrath of the students wont spare them even if they enter the dungeon to sow the seed of disunity to fulfil the task given them by their paymasters, we will fish them out of their coven and make them pay for their betrayal and atrocities against the collective interest of the students we all swore to protect.