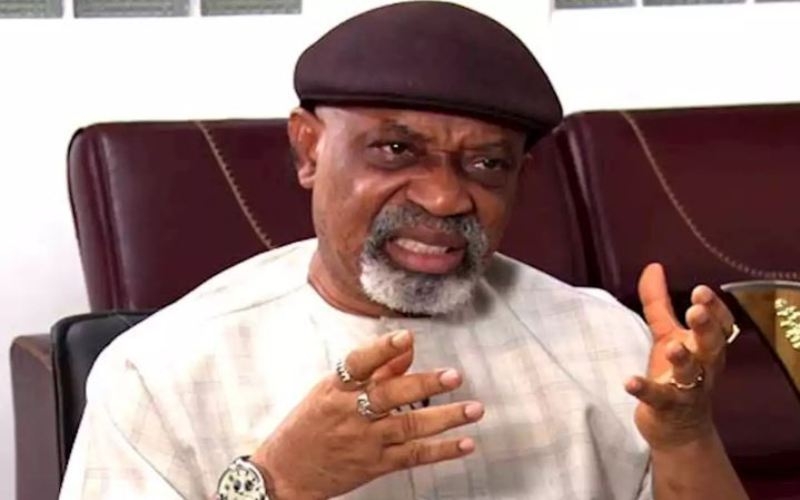 The Minister of Labour and Employment, Sen. Chris Ngige has accused universities lecturers of making negotiation with the federal government difficult, blaming the Academic Staff Union of Universities (ASUU) for prolonging the industrial strike embarked on since February 14th.

Ngige, who disclosed this in a statement issued by Patience Onuobia, Acting Head of Press and Public Relation in the ministry on Tuesday in Abuja, was reacting to the insinuations that he was responsible for the ongoing action by the union.

Ngige, however, said he had done what many could not do to forestall strikes by ASUU and according to him, negotiation now is being made impossible by ASUU.

“For example, ASUU insists that the National Information and Technology Development Agency (NITDA) should take the payment platform, University Transparency Accountability Solution (UTAS) that it developed.

“That they should deploy it for payment in the university whether it is good or bad, whether it failed integrity and vulnerability test or not.

“ASUU members know that fraud committed on payment platforms can run into billions. If a hacker adds zeros to hundreds, it becomes billions,” he said.

Ngige noted that NITDA brought out the report of its test on UTAS, noting that it passed the user acceptability but failed vulnerability and integrity tests which were the two critical tests that prevented fraud.

“As a conciliator, I spoke to ASUU and NITDA to continue the test and see whether they could make up the lapses and arrive at 100 per cent because that is what NITDA insists on.

According to him, NITDA said they cannot even take the platform at 99.9 per cent of vulnerability and integrity. That they can’t take that risk on a payment system, that it can be hacked into.

“These are the issues. So if you hear someone saying Ngige is responsible, it is wrong. I’m not the one that implements. I’m the conciliator.

“I conciliate so that there will be no more warfare and even in conciliation, once I apprehend, the parties go back to status quo ante- which means, you call off the strike.

“ASUU should have by now called off the strike because that’s what the law says.

“I have earlier, while we convened the National Labour Advisory Council in Lagos last month, urged the NLC to which ASUU is affiliated, to intervene in this respect,” Ngige said.

He also revealed that Prof. Nimi Briggs Committee on Renegotiation of 2009 Agreement which ASUU shunned despite several appeals to them had rounded off its assignment and submitted to the Ministry of Education.

He added that “we will follow it from there. There is a bright light at the end of the tunnel”.

The minister, however, noted that he had successfully conciliated 1,683 industrial disputes since assumption of office in 2015.

He said that the role of the Minister of Labour was to conciliate disputes and did not include the implementation of agreements reached with parties.

“However, when conciliation fails, the Minister is under obligation by sections 9 and 14 of Trade Disputes Act, Cap T8 , Laws of the Federation of Nigeria to transmit the results of the negotiation to the Industrial Arbitration Panel (IAP) or to National Industrial Court of Nigeria (NICN).

“In the ongoing ASUU imbroglio, I’m the conciliator. I bring them to negotiate with their employers.

“That is the Ministry of Education and the National University Commission as well as IPPIS, the office of the Accountant General of the Federation, all under the Ministry of Finance.

“At the end of every negotiation, we put down what everybody has agreed on in writing and add timelines for implementation,” he said.

The Minister also noted that ASUU strike had been a recurrent decimal in the last 20 years, adding that they had gone on strike, 16 times. So, there is nothing new as such.

“What is new however is that I have done what Napoleon could not do,’’ he said.

Ngige, in another development, mourned the death of former Minister of Labour, Graham Douglas.

He described the late Douglas as a “quintessential politician” who excelled in labour administration at the incipient era of this democratic dispensation.

Ngige added that Nigeria has lost a patriot.

“Graham Douglas will be remembered for effectively managing labour between 1999 and 2000, a very difficult period for the tripartite community, having just emerged from long military dictatorship,” he said.

He prayed God Almighty to comfort his family and grant him eternal rest.