Home » Education » If AGF can steal N80bn, ASUU have no reason to end strike – Reno Omokri 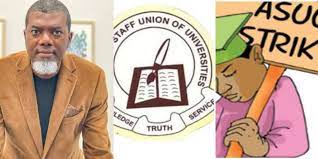 “Dear ASUU, If the Accountant General of the Federation can steal ₦80 billion, then you have no reason to end your strike,” said ex-President Goodluck Jonathan’s former aide, Reno Omokri.

He stated this in a tweet on Tuesday after the Economic and Financial Crimes Commission announced the arrest of the Accountant General of the Federation, Mr. Ahmed Idris, for alleged involvement in fraud and money laundering worth N80 billion.

TheNewsGuru.com (TNG) had reported that Nigeria’s accountant-general was arrested on Monday “after failing to honour invitations” by EFCC to respond to the allegations.

He encouraged the lecturers should insist that the Federal Government pays them with the N80 billion allegedly stolen by the arrested head of Nigeria’s treasury.

Omokri wrote, ”Ask Buhari to use the stolen ₦80 billion to pay you and then keep the change. After all, the money you are asking for is not even up to ₦80 billion!

“Just look at how morally bankrupt Nigeria is. The same Accountant General of the Federation, Ahmed Idris, married a 16-year-old girl and he was not sacked or arrested by Buhari.”

EFCC had said Idris “raked off the funds through bogus consultancies and other illegal activities using proxies, family members and close associates.”

The proceeds were invested by Idris in real estate in the capital Abuja and in his home state of Kano in northern Nigeria, it said in a statement issued late Monday.

The National President of ASUU, Prof. Emmanuel Osodeke, said the decision was taken after the union’s National Executive Committee meeting.

Osodeke said since the last meeting the union had with the federal government in December 2021, it had not received any formal invitation from the government.

ASUU extended the action by another two months to afford the government more time to address all of its demands.

The union also accused the government of displaying an indifferent attitude toward its demands.

Osodeke, in a statement to announce the extension of the rollover strike, noted that the national executive council of the union “was disappointed that Government did not treat the matters involved with utmost urgency they deserved during the four-week period as expected of a reasonable, responsive, and well-meaning administration”.

He said the NEC concluded that the government had failed to satisfactorily address all the issues raised in the 2020 Memorandum of Action within the four-week roll-over strike period and resolved that the strike be rolled over for another eight weeks.

Osodeke said the strike continues over the government’s failure to “satisfactorily” implement the Memorandum of Action it signed with the Union in December 2020 on funding for revitalisation of public universities (both Federal and States), renegotiation of the 2009 ASUU Agreement and the deployment of the University Transparency and Accountability Solution.

Other demands of the union as listed by ASUU include Earned Academic Allowances, State Universities, promotion arrears, withheld salaries, and non-remittance of third-party deductions.