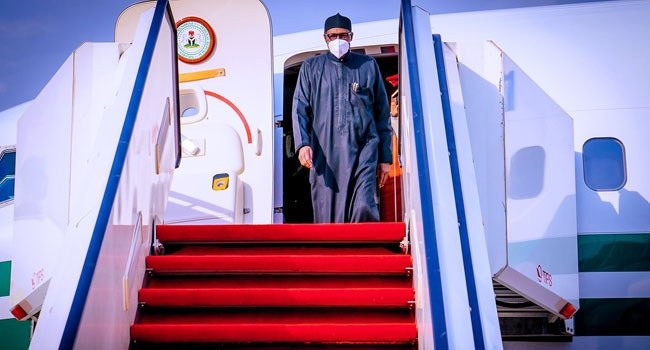 President Muhammadu Buhari is expected in Lagos tomorrow (Thursday) for the official commissioning of the Lagos-Ibadan rail line.

According to reports, the Minister of Transportation, Rotimi Amaechi is already in Lagos for the big event.

He undertook a last minute inspection tour of the terminals and sub-stations along the 156km route preparatory for the big event tomorrow.

Amaechi, accompanied by key officials of the Ministry including Dr. Magdalene Ajani, Permanent Secretary, Federal Ministry of Transportation; Fidet Okhiria, Managing Director of the Nigerian Railway Corporation among others kick-started the inspection at the Ebute-Metta-Apapa main complex where work has been completed before heading for the Asiwaju Bola Tinubu Complex.

At the Apapa port, event planners could be seen putting make-shift structures in place ahead of the commissioning as the Minister expressed satisfaction with the level of work done.

Residents of adjourning communities trooped out enmasse as they waved to Amaechi who undertook a train ride across all the stations, inspecting terminals, underpasses and overpasses.

Built by the China Civil Engineering Construction Corporation, CCECC at a cost of $1.5 billion, the double-track standard gauge has 10 sub-stations between Lagos and Ibadan.

With modern coaches already procured by the federal government, passengers can now afford to breath a sigh of relief as they need only two hours to transit from Lagos to Ibadan.

TheNewsGuru.com, TNG reports that the Minister of Information and Culture, Alhaji Lai Mohammed had last week during a tour of the project with Amaechi hinted on the president’s presence and official commissioning of the rail line.

Mohammed told journalists at the Wole Soyinka Station in Abeokuta, Ogun State capital that the inspection was to ensure that all the T’s are crossed and I’s dotted ahead of the inauguration.

He said: “Tentatively, the Lagos-Ibadan standard gauge would be commissioned on June 10. What the Honourable Minister is doing is to ensure that all the I’s are dotted and the T’s are crossed before June 10.

“Not only this is the first time we are having a dual standard gauge but you can see the passion by which the minister supervises the project.”

Baba Suwe, others get N500m compensation from Sanwo-Olu