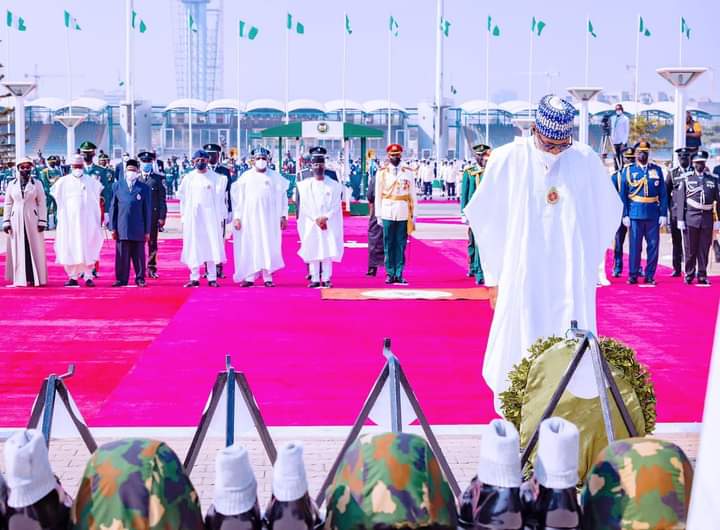 The event, which involved laying of wreaths at the National Arcade in Abuja, was the climax of the main activities lined up to celebrate the 2022 Armed Forces Remembrance Day Celebration (AFRDC).

First to lay the wreath was the President, followed by the Vice President, the Senate President, Speaker, House of Representatives and Chief Justice of Nigeria.

In another order, the Minister of Defence, retired Maj.-Gen. Bashir Magashi and his Federal Capital Territory counterpart, Malam Mohammed Bello, laid the wreaths.

Other dignitaries, who also performed the wreath-laying ceremony are members of the diplomatic corps and their representatives as well as Nigerian Legion and widows of late officer/soldiers represented by Hajia Aisha Lemu.

Buhari, thereafter, signed the anniversary register and released the ceremonial pigeon as a symbol of national peace.

The celebration started with series of activities including Jumma’at prayer on Jan. 7, at National Mosque and Interdenominational Christian service on Jan. 9.

The AFRDC is celebrated globally to recognise and appreciate the sacrifices made by their citizens for the cause of peace.

In Nigeria, Jan. 15, is set aside annually to honour fallen heroes who laid down their lives in service to humanity during the first and second world wars, Nigerian civil war, peace support and various internal security operations.

The event is also used to honour veterans still alive and as a medium for soliciting financial, moral and material support for the families of the fallen heroes.

2023: Tinubu will take Nigeria to the gutters if he becomes president - Bode George