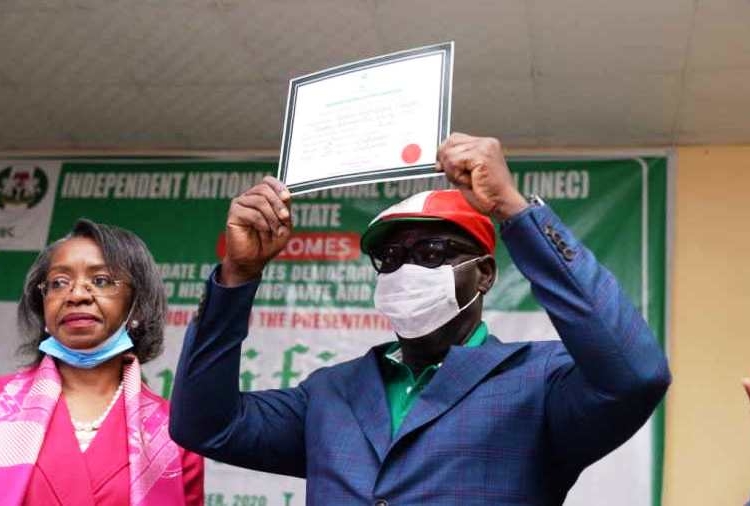 Governor of Edo State, Godwin Obaseki has expressed gratitude to President Muhammadu Buhari for his victory at the Supreme Court.

TheNewsGuru.com (TNG) reports Governor Obaseki won his certificate forgery case at the Supreme Court on Friday and thanked Buhari for ensuring a vibrant and fair judiciary that upholds the will of the masses.

In a statement following the ruling of the Supreme Court, Obaseki dedicated the victory to Edo people, while also expressing thankfulness to the People’s Democratic Party (PDP).

The statement reads: “The verdict of the Supreme Court on the certificate forgery case brought against me by the All Progressives Congress (APC), during the 2020 governorship election, is a vindication of the decision of God and the people of Edo State.

“The ruling puts to rest the diabolical controversy contrived by opposition elements over my credentials and puts to shame the individuals that sought to swindle Edo people with falsehood and lies in pursuit of pecuniary gains.

“The judiciary has once again, demonstrated that it is willing and capable of defending our democracy. I see this victory as a renewed call by God Almighty to rededicate myself to His service and that of the people of Edo state.

“From the statement by the Supreme Court Justices, it is clear that they align with what Edo people knew all along, which is that there was no merit in the case. The controversy was diabolical and ill-willed. It is reassuring that the Judiciary has upheld the wishes of the masses once again.

“I dedicate the victory to Edo people, who resolved to stand by me through it all despite the campaign of calumny.

“I appreciate the Peoples Democratic Party (PDP) for supporting and holding steadfastly to the vision of our party for a better Edo State.

“I am also grateful to His Excellency, President Muhammadu Buhari (GCFR) for ensuring a vibrant and fair Judiciary that upholds the will of the masses”.

Meanwhile, the PDP in a statement signed by its National Publicity Secretary, Kola Ologbondiyan has hailed the Supreme Court verdict.

The statement reads: “The Peoples Democratic Party (PDP) hails the judgement of the Supreme Court which upheld the election of Edo state Governor Godwin Obaseki, describing it as the inevitable triumph of the will of the people over anti-democratic forces.

“The PDP asserts that the verdict of the apex court in throwing out the petition of All Progressives Congress (APC), is a resounding reinforcement of the popularity of the PDP and Governor Obaseki in Edo state, as firmly established in the election.

“The party urged Governor Obaseki to continue in his commitment towards the development of the state and the wellbeing of his people in line with the manifesto and ideology of the PDP; the very reason he was overwhelmingly re-elected as governor of the state.

“The PDP is proud of Governor Obaseki for the empowerment of the people as well as massive infrastructural development of Edo state in critical areas of healthcare, education, agriculture and food production, oil and gas, industrialization among others.

“The party also commended the judiciary for its courage in upholding justice and the will of the people in the Edo governorship election”.