by Emman Ovuakporie
in News, Politics
Reading Time: 4 mins read
A A
0 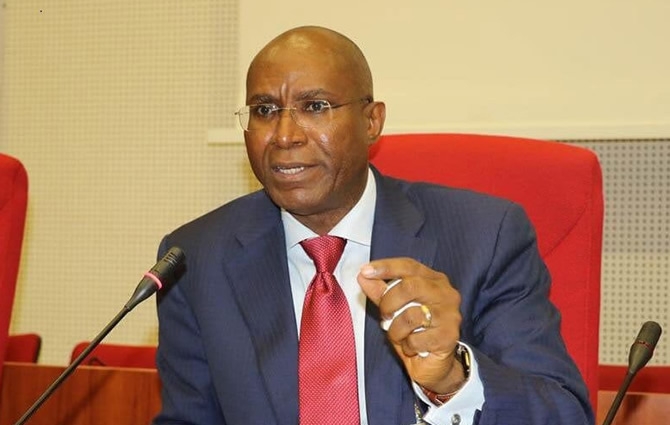 After the collation of proposed bills from 12 centres across the six geopolitical zones of Nigeria in line with the ongoing constitution review, lawmakers have been advised to work in the interest of the country rather than sectional interest.

This came to fore from a separate address by the Deputy Senate President Ovie Omo-Agege and Deputy Speaker, House of Representatives, Ahmed Idris who were the presiding officers of a retreat organised on Friday in Abuja by a joint Adhoc Committee on the review of the 1999 Constitution.

Omo-Agege while commending lawmakers of their tremendous dedication and sacrifices in the review of the 1999 Constitution, reminded them that the success of the process largely depends on their support and partnership.

According to the Deputy Senate President, going forward, after passage of the proposals by the National Assembly in a fortnight, you will be the pillar on which this work will be anchored. That is why it is prudent to meet with you today and update you on the progress we have made after the public hearings that held in 12 centres across the six geo-political zones of the country, of which you fully participated.

“The proposed amendments in the bills we have shared with you set out institutional and legal reforms, which together with sufficient political will, will help to strengthen institutions of governance, provide for accountability and transparency in governance; and create an independent judicial system that would ensure effective administration of justice in Nigeria.

The overarching rationale for the amendments contained in these bills are thus predicated on the need to amongst others: strengthen the legislature’s authority to enable it to serve as an effective pillar of checks and balance to the executive; strengthen independent constitutional bodies; create and strengthen a culture of good governance; address the issues of corruption, revenue leakages and unbridled government spending”.

“I assure you most sincerely that our work up to this point has been guided strictly by best legislative practice, integrity, open mindedness, and patriotism. I therefore encourage you, irrespective of political leanings and other affiliations to abide by the same standards while making your contributions. I know it is the desire of every Nigerian that this process will bring positive transformations to our country. Therefore, we should all leverage this retreat to bequeath to our nation a constitution that speaks to the yearnings and aspirations of every Nigerian, he concluded.

On his part, Deputy Speaker of the House of Representatives, Ahmed Idris said during the hearings as organised between May and June 2021 some of the issues canvassed by Nigerians were aggregated into thematic areas and Members sponsored bills in line with peoples’ aspirations.

“During this first batch of the review exercise, the Committee in the House of Representatives considered sixty-two (62) Bills out of which twenty-six (26) Bills were recommended for harmonization with the Senate. Of the 62 bills, eight (8) bills were rejected, twenty-five (25) Bills were retained with modifications and the consideration of 3 bills were deferred”.

“We have worked tirelessly to engage, negotiate, debate, lobby, review and persuade in order to reflect the various competing and contrasting aspirations of Nigerians of different leanings and backgrounds. One thing we are sure of is that no one has been left behind. We have aggregated all manners of proposals, sorted them out to meet the constitutional guidelines and criteria and have ultimately harmonized positions after lengthy debates and majority votes on several critical issues”,he said.

Speaking further, he explained that the committee have no preconceived positions on anything but believe that they must do whatever is necessary to provide a platform for Nigerians to air their views, give their positions and canvass whatever they feel would make the country better, and make governance more efficient and successful.

“We also are cognizant of the fact that we cannot work in isolation if we must achieve concrete result and deliver on the promises we have made to Nigerians. Whatever we have done will still go through the State Houses of Assembly for their own input and vote. Hence the need for this collaborative synergy which will give us the opportunity to engage, consult and harmonize for a smoother, tidier and more efficient Constitutional review”he said.

To this end, he urged all to remember that they act as representatives of Nigerians. As such, as a rule of engagement, they should put Nigeria at the front burner and not personal interest or sectional interest.

While commending lawmakers and stakeholders involved in the constitution review of their efforts, representative of conference of Speakers of state legislatures in the country, Abubakar Suleiman said no doubt that the retreat will offer a better platform for effective and efficient engagement with the stakeholders with the view of giving to our people and nation the constitution that can stand the test of time.

‘We have a onerous responsible of altering the constitution to meet the yearnings and needs of our people, and these we must do to the admiration of the citizens”, Suleiman said.

He therefore advised that the executive arm of government should not be left behind to ensure smooth assent of the constitution when fully reviewed.