The Lagos State Government (LASG) has announced a traffic diversion plan for the construction of the Opebi-Ojota Link Bridge inaugurated earlier in the year by Governor Babajide Sanwo-Olu.

Due to the bridge construction, the traffic diversion will be in two phases, commencing on June 6 and lasting 16 months, Commissioner for Transportation Dr Frederic Oladeinde said.

Lagos govt to divert traffic on Agege road for one month

He advised residents of Opebi to use Opebi Link Road to access Tunde Osilaja Street to connect Salvation inbound Ajanaku Street and link Opebi Road through Thomas Ajufo, to reach their desired destinations.

LASG government explained that commuters from Mende Road are equally enjoined to use Ojota Interchange and connect Opebi via Ikorodu Road inwards Aderibigbe.

It would be recalled that Governor Sanwo-Olu, last 5 months, promised that in this year it would be a Season of Consolidation.

In his words: “Also, this year 2022 will witness a milestone achievement in the rail transportation system in our State, as we expect the 37km Red and 27.5km Blue Line Rail projects to commence commercial operations between the last quarter of this year and first quarter of 2023.

“These are just a handful of the projects that will be completed or advanced this year. Indeed, 2022 will witness remarkable development on various fronts: Infrastructure, Technology, Health and Education, Security, and many more; all of which will translate to a significant improvement in the quality of life of all Lagosians.”

Meanwhile, the construction of the Lagos-Badagry Expressway, the Nigerian section of the Trans-West African Coastal Highway that connects Lagos in Nigeria with Dakar in Senegal is reportedly making good progress and well on schedule.

This came to light following a recent site visit by Adedamola Kuti, the Director of Federal Highways in South West, to inspect the amount of work that has been done on section 3 of the expressway, which runs from Agbara to Seme. 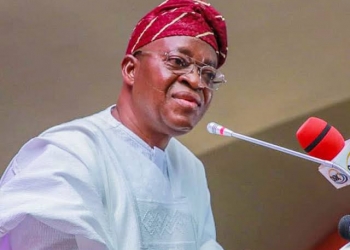