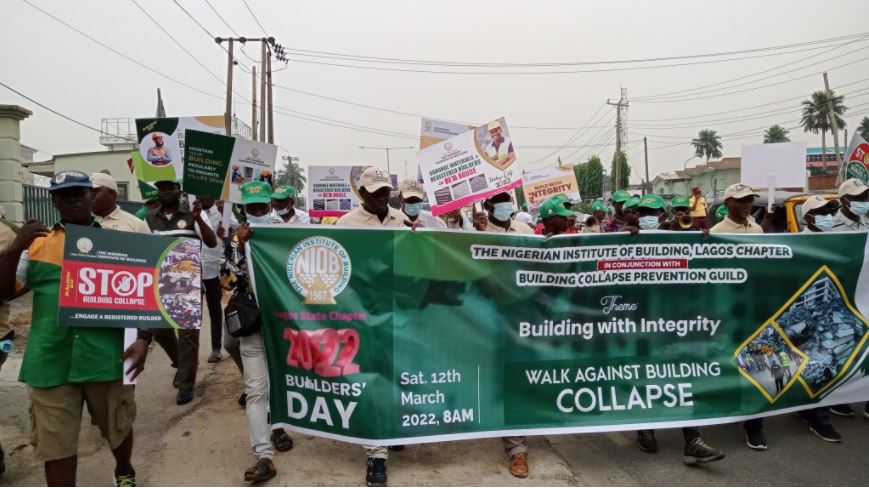 Atumonyogo said this at Falomo, Lagos, during a walk against building collapse organised by BCPG as part of activities to mark the 2022 Builders’ Day weeklong activities, organised by the Lagos Chapter of the Nigerian Institute of Building (NIOB) in collaboration with the BCPG as an annual event to sensitise governments, construction stakeholders and the public against collapse.

The same rally held simultaneously from Medical Road in Ikeja to the Lagos State House of Assembly in Alausa.

Atumonyogo said the rally was not a time to trade blames on actions or inactions but a time for all stakeholders and government to collaborate towards taming the menace in cities.

Quoting a newspaper data, he said in Nov. 2021, at least 305 people died from building collapse in Nigeria.

“This is about a quarter of those who died from Coronavirus in Nigeria from 2019 till date. Not even one per cent of the attention paid to the virus is being paid to this menace that is a mass murderer.

“During the same period, it was reported that no fewer than 449 people got injured in 83 cases. These are only cases reported by the media. Lagos remains the epicenter of this ugly menace in Nigeria.

“Amongst those who died within the same period were 42 innocent children who died when a building serving as their school on Massey Street, Lagos Island, collapsed while they were in session, crushing their tender lives and leaving their families in grief and inconsolable till date,’’ he said.

He listed the causes of building collapse as man-made but required courageous actions of government, professionals, developers and all other stakeholders to correct.

He advised built environment stakeholders to embrace best practices in the sector while appealing to the Lagos State Government to increase housing stock to absorb its growing population.

He commended Gov. Babajide Sanwo-Olu’s announcement that buildings above six floors will now be reviewed by external consultants before approvals are granted.

Atumonyogo urged the state government to collaborate with BCPG which has a network of professionals across the 37 Local Government Areas and Local Development Authorities for effective monitoring of construction sites.

The President of the Nigerian Institute of Building (NIOB), Prof. Yohana Izam, insisted that a shift in focus to integrity in construction was the only remedy to end embarrassment of building collapse in the nation.

Izam, represented at the rally in Ikeja by Mr Adelaja Adekanbi, a former chairman, Lagos Chapter of NIOB, said building collapse had become a national embarrassment that could be corrected through upholding integrity.

He commended the Lagos State Government’s Building Regulation which mandated that construction sites should be managed by professional/registered Builders.

“This integrity driven building regulation of Lagos State is indeed highly recommended. I am also pleased to note that a good number of states are now towing the path of integrity,” he said.