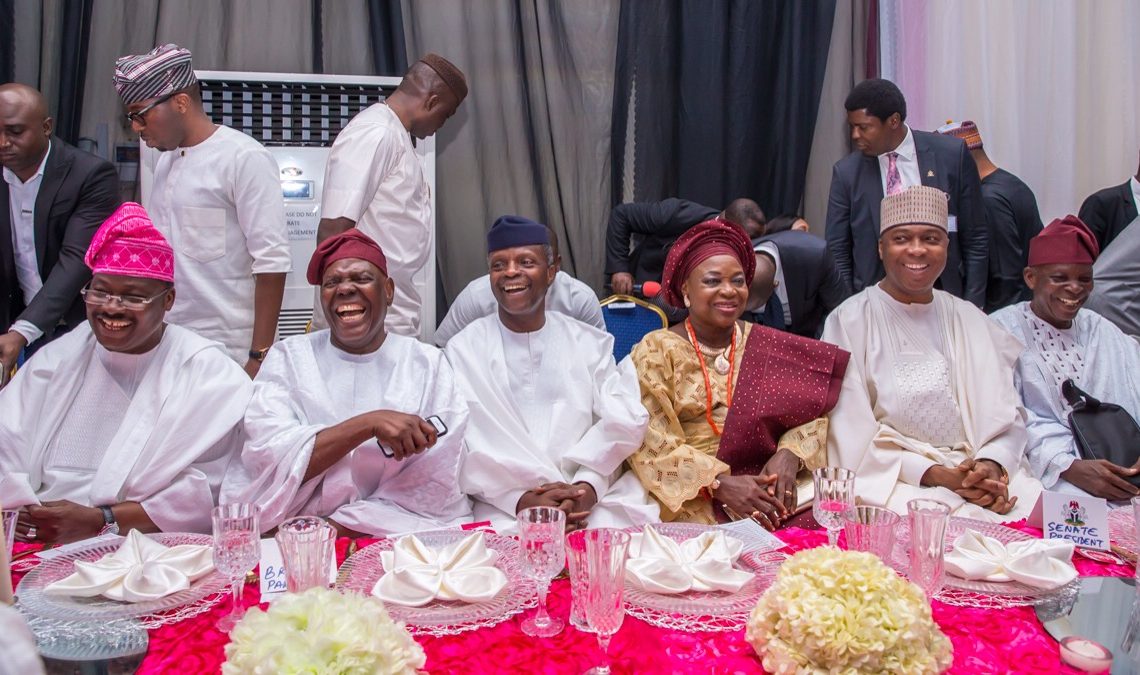 Acting President Yemi Osinbajo has urged husbands not to abandon their marital responsibilities to their wives in their matrimonial home.

The Acting President made the charge in his message at the wedding of Miss Wuraola Akande and Dr Olawale Solabi at the International Conference Centre, University of Ibadan, on Saturday.

TheNewsGuru.com reports that Wuraola is the daughter of a former governor of Osun, Chief Bisi Akande, a chieftain of the ruling All Progressives Congress (APC).

My wife’s adulterous lifestyle is upsetting me – Cleric

The acting president maintained that men should be alive to their responsibilities as the head of the home.

“Men are supposed to see their wives as `Help Meet’ and not `Help Mate.’’ ‘When I say `help meet’, it means she will fill the gap where there is need for it and not leaving your responsibilities to her,’’ he said.

Osinbajo advised the new couple to love each other unconditionally and to allow God to reign supreme in their home and affairs.

According to him, “the aim of marriage is companionship, which must be a lifelong experience. There are reasons for exhibitions like marriage.

“The major reason is to find a partner whom one can spend the rest of his or her live with,’’ Osinbajo said.

Also speaking, Gov. Abiola Ajimobi of Oyo State urged the couple to be better companions, adding that long lasting marriages are those built on love and fear of God.

He told the couple that the success of the marriage would depend largely on the two of them.

According to him, the marriage could only work if the wife submits totally to the husband while the husband is also expected to always love and listen to advice from his wife.

“Always endeavour not to share your problems with the third party, be it friends or parents,’’ he said.

The ceremony was also attended by other state dignitaries including President of the Senate, Dr Bukola Saraki as well as governors Ibikunle Amosun (Ogun); Rotimi Akeredolu (Ondo) and Rauf Aregbesola(Osun).

Also in attendance were a former governor of Osun, Olagunsoye Oyinlola; Minister of Information and Culture, Alhaji Lai Mohammed and the Minister of Finance, Mrs Kemi Adeosun.

Are you dead or alive? Femi Aribisala