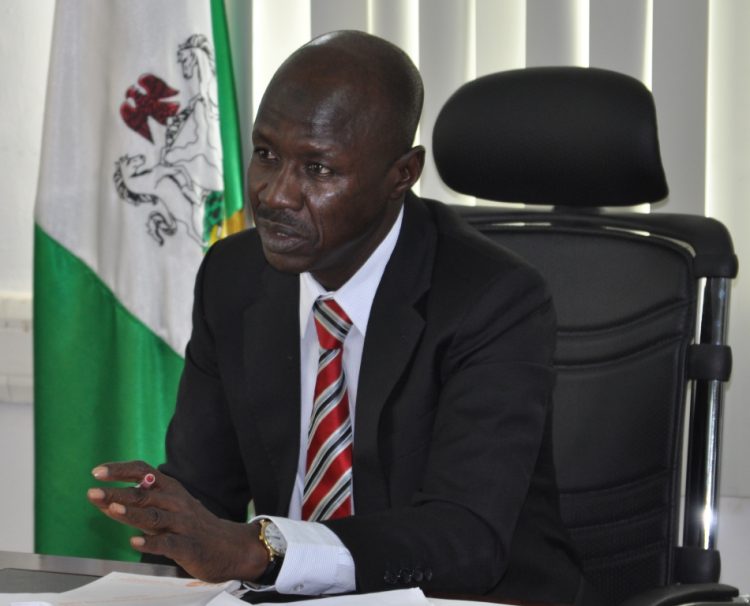 The Economic and Financial Crimes Commission (EFCC) on Tuesday bowed to an order of a Federal High Court in Abuja over alleged falsehood and media trial engaged by the anti-graft agency against a military officer, Colonel Nicholas Ashinze.

Justice Kolawole had ordered the EFCC to apologize to Ashinze over a statement which “degraded” the officer as well as portrayed him as guilty in an alleged N36bn fraud.

At the resumed hearing on Tuesday, EFCC begged the court and the defendant, Ashinze.

EFCC claimed that “the error in figure was a mix-up in the body of the release as the headline reflected the correct information.

“The reference to Ashinze as retired is regretted. We have since discovered that he is a serving Colonel in the Nigerian Army”.

Counsel to Ashinze, Mr. Ernest Nwoye, had an hearing on March 21 protested the press statement issued by EFCC in which the defendant was reported to have been indicted by the court for diverting and misappropriating a whopping sum of N36billion.

Apart from the alleged N36bn said to have been diverted and misappropriated, the EFCC statement also referred to serving Colonel Ashinze as a retired officer.

The counsel who drew the attention of Justice Gabriel Kolawole to the offending EFCC press statement, tendered the statement and the newspaper publications at the court to establish bias and misrepresentation of the court proceeding of March 7, 2017 by the anti-graft agency.

Nwoye told the Judge that Colonel Ashinze was never charged by EFCC for any offence on N36billion diversion and misappropriation and wondered where EFCC Media team, that was not present in the court, got its proceeding that the defendant had been indicted for the amount.

The counsel urged the court to condemn Media Trial the defendant is being subjected to as such action if not checked, will lead to misrepresentation of facts by the general public.

Nwoye also tendered newspaper publications that emanated from the EFCC press statement issued by Wilson Uwujaren, Head of Media and Publicity in the EFCC.

The EFCC counsel denied ever granting press interview in respect of the trial but admitted receiving letter of complaint from Nwoye and that he consulted with EFCC and discovered that the Press Statement was actually released to the media.

Uket, in his defence said that contrary to the charge of N3billion alleged transfer, evidence from witnesses have shown that about N5billion was involved.

However, Justice Kolawole who was not impressed by the argument of the EFCC’s counsel told him that the proceeding would have to stop pending the time the EFCC would put its house in order by stopping to mislead the public on court proceedings.

Justice Kolawole in a short ruling on the protest from Barrister Nwoye said that “It is unfair for EFCC as a complainant in this trial to resort to self-help by engaging the defendant in the media trial at the same time in the court trial.

His words: “If you want to try the defendant in the media, you have to limit yourself to the media. You have to stop misleading the public in the fact of this trial.

“Let me say it for the sake of emphasis that EFCC must stop the use of journalists to distort proceedings in my court. You cannot be engaging in two trial: one in the court and one in the media at the same time.

“If you are not satisfied with my decision to stop this trial pending the time the EFCC retract this offending press statement of my court proceeding, then you can take your case to another court

“This press statement by one Wilson Uwujaren who claimed to be from EFCC is scandalous and prejudice to fair trial of the defendant in this matter.

“In order to prevent media and court trial at the same time with one misrepresenting the order, I have stopped this trial pending the time the EFCC retracts the offending press statement.

“The trial of the defendant has nothing to do with N36billion diversion and misappropriation.

“The retraction has to be done between now and April 13, 2017. And this EFCC witness is hereby ordered to step down from the witness box and come back on April 13, 2017

“The court proper proceeding cannot materialise where records and facts of the case are being distorted by EFCC that is even the complainant in the matter.”