The Nigeria Immigration Service has said it is investigating the authenticity of the passport obtained by David Ukpo Nwanmini, who was alleged to have been trafficked to the United Kingdom for organ harvest by a former Senate President, Ike Ekweremadu and his wife, Beatrice.

The service, it was gathered, is probing allegations that the travel document may have been fraudulently procured.

The acting Comptroller-General of Immigration, Mr Idris Jere, confirmed the investigation on Saturday.

Ekweremadu, the senator representing Enugu West Senatorial District, was arrested by the UK Metropolitan Police on Tuesday with his wife, for conspiracy to harvest the organs of a minor.

Ekweremadu and his wife allegedly facilitated David’s entry into the UK to transplant his kidney into their daughter, Sonia, who is suffering from kidney failure. 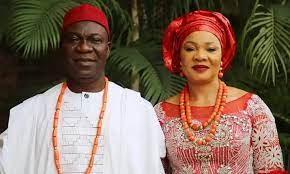 The couple was arraigned at the Uxbridge Magistrate Court in London on charges of conspiracy and organ harvest on Thursday.

The prosecutor disclosed that David is a 15-year-old boy, adding that he was not aware that he was in the UK to donate a kidney until he went for a hospital appointment with the Ekweremadus.

A trending picture of David’s passport, however, indicated that he was born on October 12, 2000. This means he is 21 years old.

Responding to inquiries on the controversy surrounding David’s passport, the CG said the service was probing the passport and would soon come out with its findings.

“We are investigating the passport and the issues surrounding it. We will come out with our findings soon,” Jere stated.

TheNewsGuru.com (TNG) reports that the letter which accompanied the visa application of David on December 28, 2021 showed Ekweremadu informed the UK authorities that he was taking the person abroad for a kidney transplant for his daughter.

The letter reads: “I am writing in support of the visa application made by Mr Ukpo Nwamini David who is currently having medical investigations for a kidney donation to Ms Sonia Ekweremadu.

“David and Sonia will be at the Royal Free Hospital London, and I will be providing the necessary funding. I have enclosed a statement of my bank account.”

Ekweremadu was arrested on June 23 over charges he tried to smuggle in a child to the UK for organ harvesting.

The Nigerian senator appeared in court on Thursday afternoon in London and was denied bail. His wife Beatrice is also standing trial for the same charges.