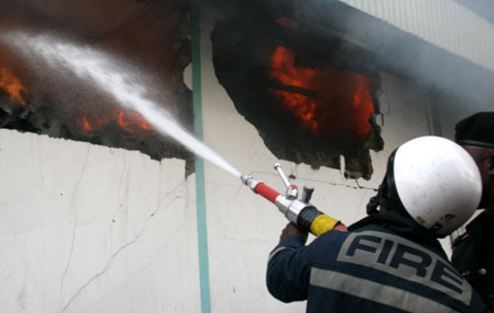 A section of Sterling Bank, Oke Ilewo branch, located at the OPIC Roundabout, Abeokuta, was on Tuesday gutted by a mid-day fire.

A staff of the bank, who spoke on the condition of anonymity, said that the fire incident occurred at around 12 noon due to electrical fault.

He said attempts by security personnel to use fire extinguishers to put out the fire failed, and the management had to call the state fire service.

The men of the Ogun State Fire and Safety Service put out the fire and prevented it from spreading to other parts of the bank.

Mr Adebambo Adesanya, the Deputy Director, Ogun Fire and Safety Service, said that the fire service received a call from the bank and responded immediately.

“We received a call from the bank that there was a fire incident and within a few minutes, we arrived the scene to control the situation. By the grace of God, everything is now under control.

“The fire occurred as a result of power surge, presently I can’t confirm the extent of the damage but later, we will be able to ascertain that. But only a part of the roof was affected.

“We have to be very careful with our electrical gadgets during this harmattan period because 90 per cent of the equipment that we use in our offices and homes are purely combustible elements and can ignite anytime there is explosion.

“We must ensure that we guard against this and get ourselves ready to tackle and avert incidents like this one,” Adesanya said.

Mr Taiwo Olaleye, a customer, said that the incident was caused by power surge in the ICT unit of the bank.

“I was about to receive money from the cashier in the banking hall when I heard a loud noise.

“At first, I thought that armed robbers were outside the banking hall but later noticed that it was fire.

“Everybody, including the staff and the customers had to rush out for their lives through the emergency exit,” Olaleye said.