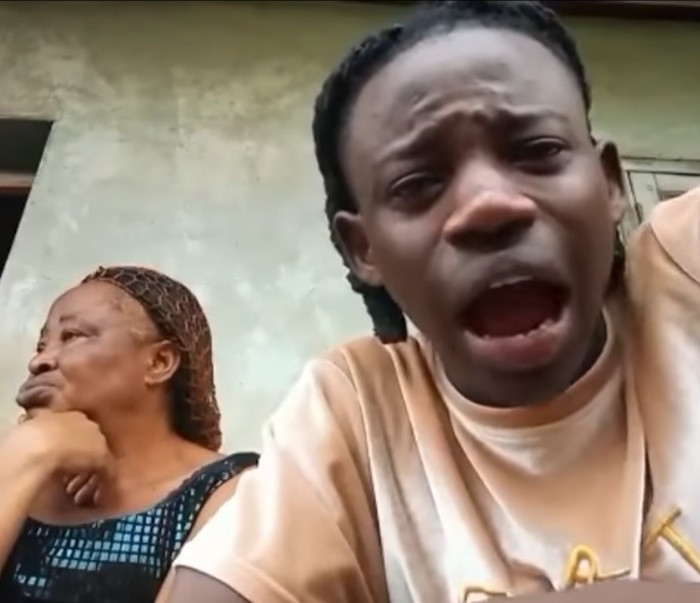 A certain woman, Taiwo Ogunade, has weeped over  how some men suspected to be policemen attached to the Oyo State Police Command snatched money and phone from her grandson.

Ogunade on Thursday, said that the N150,000 she gave her grandson, Emmanuel Jesugbemi, to pay for her rent was taken by the officers.

She said, “I don’t like something that will make my blood pressure rise. I am fed up and I know that God will punish them”, she told Punch.

Her grandson, Jesugbemi, said that the sad incident happened in the Apata area while he was going to deposit the money in the bank.

The 20-year-old alleged that the policemen, led by one Badru Samson, intercepted the motorcyclist conveying him to the bank and ordered him to get down.

The artiste claimed that the policemen slapped him repeatedly and while at it, called him a fraudster.

Jesugbemi, who had narrated the incident in a video clip posted on his Instagram page, @official_babyjez, said that the incident happened on Wednesday.

He said, “Grandma’s house rent was due, so she went to the Apata area to collect money from somebody to join [add to] what she had for the rent. After collecting the money, she called me to meet her at Apata, where she gave me the N150,000 to deposit into our landlord’s bank account.

“I boarded a motorcycle and while on my way to deposit the money in the bank, the policemen blocked my motorcyclist with a black car with no number plate and ordered me to get down. I saw four policemen in the car when I got down and one of them slapped and kicked me. He even used his gun to hit my head and called me a Yahoo boy.

“The policemen asked for my phone and told me to unlock it; but they did not find anything [incriminating] after they checked it. They wanted to search me, but I stopped them because policemen had searched one of my friends before and in the process, they put hard drugs in his pocket. So, I willingly brought my pockets out and they saw the N150,000.”

He said that the policemen drove him from the Apata area to Iwo Road, where he was dropped off after he had been dispossessed of the money.

“They asked who owned it and I told them that it was for my grandma and that I was on my way to pay her house rent. The policemen said I was lying. One of them kicked my stomach and forcefully collected it from me.

“They told me to format my phone and took it; they put me inside the car and drove me from Apata to under the bridge in Iwo Road, where they dropped me off.

“I had to plead with them to give me my SIM card. They also took the extra N2,000 with me and I had to trek from Iwo Road to our house in Dugbe,” Jesugbemi added.

2022 will be tough if Nigeria fails to restructure —Gani Adams

2022 will be tough if Nigeria fails to restructure —Gani Adams