by Bartholomew Madukwe
in Crime Watch, News
Reading Time: 3 mins read
577 6
A A
0 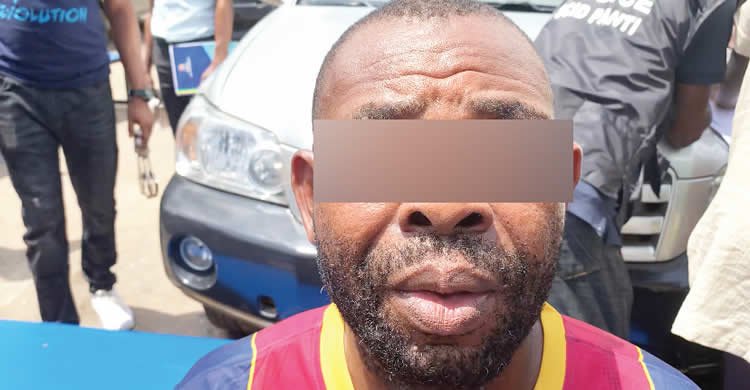 A chartered accountant, identified as Benjamin, has been arrested by the Lagos State Police Command for allegedly setting his wife, Chinyere, and brother-in-law, Ifeanyi, ablaze in the Abule Ado area of the state.

It was gathered that Chinyere and Ifeanyi were at a guest house in the couple’s residence when Benjamin allegedly set them on fire.

After perpetrating the crime, the suspect allegedly locked the duo in the guest house and went to call for help.

A source said, “His brother-in-law was a contract worker at Chevron. He was also the only son of the family. He didn’t die immediately; he made a dying declaration that Benjamin opened the door while he and his sister, Chinyere, who was Benjamin’s wife, were in the guest house, poured petrol on them, set them ablaze and locked them inside.

“Ifeanyi struggled to come outside, but the woman couldn’t. Benjamin ran outside and started shouting that fire was burning. There may be some underlying reasons for him to have done that. The house he stays in belonged to his wife and she wanted to sell it because she heard he wanted to sell the house without her consent.

“There was also a case of jealousy because he said when his wife returned from Scotland, she kept talking to someone on the phone despite cautioning her against it, and the whole thing accumulated.

“The wife had relocated to Scotland with their children. Their children are still in Scotland; he has thrown the children into jeopardy with this incident.”

Speaking on behalf of the state Commissioner of Police, Abiodun Alabi, the state Police Public Relations Officer, SP Benjamin Hundeyin, while parading the suspect on Thursday at the command’s headquarters in Ikeja, said the victim’s husband set her and her brother ablaze after a minor quarrel.

He said, “This deals with a case of the murder of one Chinyere and Ifeanyi by Chinyere’s husband, Benjamin, at Abule-Ado, Lagos State, on April 1, 2022, around 3.30am. The victims were set ablaze by Benjamin after a minor quarrel. The suspect will soon be charged to court.”

The suspect, however, denied setting his wife and in-law ablaze, adding that he also sustained burns during the incident.

He said, “My wife returned from Scotland and used her Nigerian number to call me around 9pm to open the gate. I was not at home, but I told my tenant, Stanley, to help me open the gate. I also left what I was doing and rushed home. I never knew she came with her brother until I got home.

“So, after assisting in parking some of her loads, we moved into the bedroom and started talking as husband and wife. Suddenly, she received a call and told me the call concerned her brother and she needed to be with him to receive it.

“I left her there, went to the parlour and switched on the television. But later on, I saw an unusual fire coming from the direction they were and as I moved closer, I saw smoke. But as I opened the door, I saw fire and screamed. I sustained burns also. I moved out and started shouting for help; I also asked a woman to pour water on me and that was the last thing I remembered as I woke up in a hospital.”

Bad Marriage: A Straight Talk on Divorce! – By Michael West