by Bayo Millz
in Agriculture, News
Reading Time: 4 mins read
A A
0 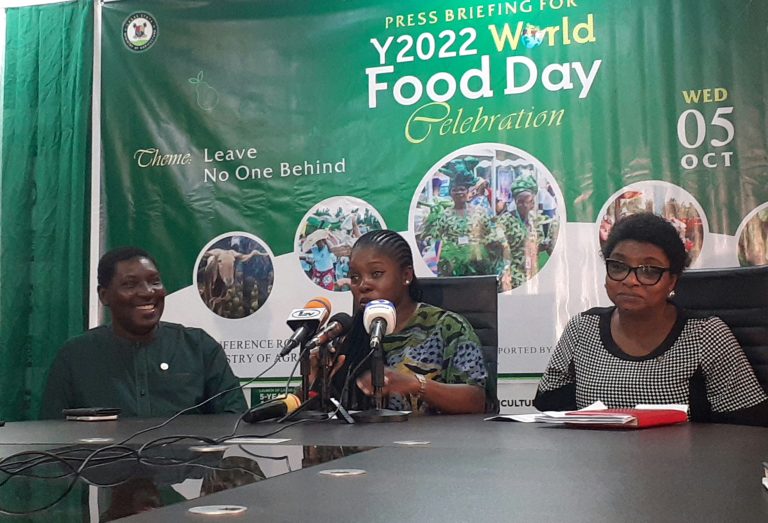 The Lagos State Government says it created over 300,000 jobs directly and indirectly through the Ministry of Agriculture in different value chains and enterprise from 2019 to date.

Ms. Abisola Olusanya, State Commissioner for Agriculture said this at a news briefing to flag off activities commemorating 2022 World Food Day on Wednesday, in Alausa.

The theme for 2022 is, “Leave No One Behind. Better Production, Better Nutrition, a Better Environment and a Better Life”.

Olusanya listed other programmes as Young African Works Capacity programme through IITA in collaboration with MasterCard Foundation and Lagos State Agricultural Development Authority, among many other interventions and programmes in the area of training.

She added that the 32 Metric Tons Per Hour Rice mill, in Imota, Ikorodu would be inaugurated in November as it was nearing completion with civil works and installation of equipment now at 97 per cent.

According to her, in the last three years, the administration trained 51, 467 beneficiaries, and empowered 5,691 women and youths cut across the various programmes.

“You can imagine that in the area of job created, at least directly or indirectly, about 300,000 jobs have been created in the last three years by this administration in the agric space.

“The state government has provided several facilities and production inputs to 6,983 beneficiaries through the Agricultural Value Chain Enterprise Activation Programme between the year 2019 and 2022.

“About 800 women were trained in Nutrition Development by Women in Agriculture (WIA) and Nutrition.

“Also, about 500 entrepreneurs were trained to access this loan based on their enterprise,” she said.

Olusanya said that 1800 women and youths were trained and empowered in various Agricultural Value Chains under the Lagos Agripreneurship Programme (LAP).

She said that graduates of the programme were exposed to three months of internship and mentoring at various farms and agrobusinesses throughout the state.

“Some beneficiaries are being trained as we speak. 1,738 youths were trained in the Young African Works Capacity Building Programme through the International Institute of Tropical Agriculture (IITA),

“Also, 819 farmers and youths were trained in the production and processing of catfish in collaboration with British American Tobacco Nigeria Foundation,

Olusanya listed activities lined-up to commemorate the forthcoming 2022 World Food Day from Oct. 5 to 18 in the state.

Others, according to her, are Ofada Rice Day Symposium for promotion on local varieties of rice; grand finale with the Governor on Oct. 16 at the Nigeria Police College, GRA and the launch of EKO-Mechanisation at Araga, Epe.

She said the state government would also use the day to raise awareness on the significance of a healthy and sustainable lifestyle among its farming population and Lagosians in general.

“As you are well aware, World Food Day is held annually on October 16, to encourage action on food security.

“The day actually coincides with the day the United Nations Food and Agriculture Organisation was founded in 1945 to combat food insecurity.

“This year’s World Food Day comes up in the midst of serious food security issues occasioned by the effect of COVID-19 pandemic, climate change and environmental degradation and loss of biodiversity.

“Also, violent conflicts across the globe, principally the ongoing war between Russia and Ukraine, and locally, the insurgency and security in the food production regions of the country,” she said.

She said this was to scale up food production, prevent and reduce food wastes, provide decent livelihood opportunities for rural, peri-urban and urban producers, and promote sustainable ways of food production, processing and marketing.

According to her, it is also to ensure food and nutrition security for all consumers and value chain actors, without leaving no one behind.

The commissioner listed some of the programmes and initiatives undertaken by the state government to raise local food production.

She said that they include Lagos CARES, the 32 metric tons per hour rice mill, Imota, prevention of transmission of zoonotic diseases, and capacity building and empowerment of farmers, women and youths.

“Furthermore, Food system policy and planning has been our major focus, this is evidenced by the launch of the 5-year Agricultural and Food Systems Road Map in 2021 by the Governor of Lagos State, Mr Babajide Sanwo-Olu.

“The Imota rice mill is part of the government’s commitment towards ensuring food security in the state which is a key component of the T.H.E.M.E.S development agenda to make Lagos State a 21st-Century economy.

“The establishment of the rice mill is expected to reduce cost of rice locally, enhance food self-sufficiency and increase revenue generation in the State and the Country at large.

“The mill is nearing completion as civil works and installation of equipment is at 97 per cent and should be inaugurated in the next couple of weeks,” she said.

Olusanya noted that the state government had purchased 20 new tractors with auxiliary equipment for farmers in the state in addressing food security, leveraging more acreage and increasing the state’s economic contribution through Agricultural Mechanisation.

She said that the tractors would be utilised as part of the Tractor-On-the-Go operational paradigm (TOG).