How Six Youths Used Dating App to Lure Gay Man From Imo to Nasarawa, robbed him

by Yabagi Danladi
in News
Reading Time: 4 mins read
A A
0 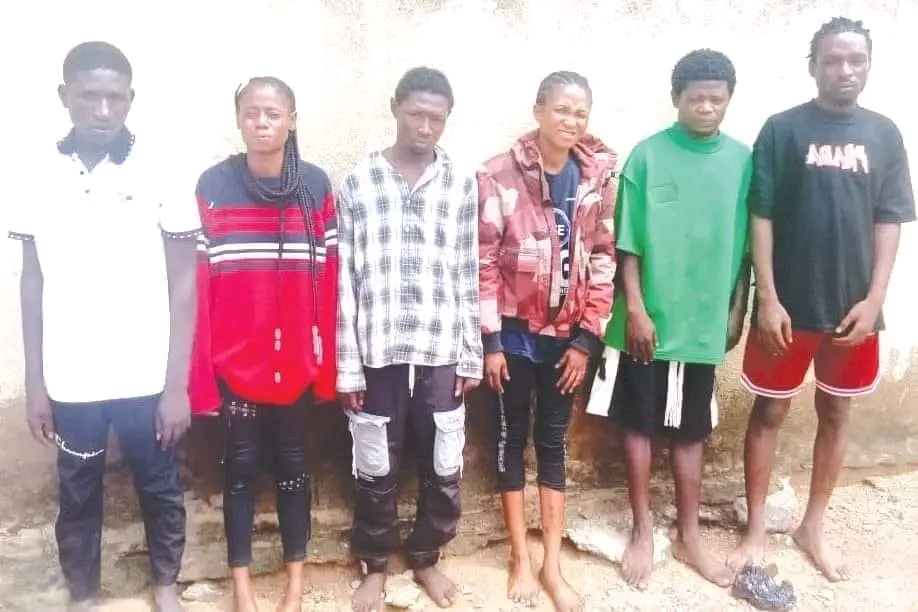 Detectives attached to the Nasarawa State Police Command have arrested six youths who specialise in using gay dating app to lure victims into their traps and then dispossessing them of their valuables and money.

The six suspects who were arrested in connection with the alleged act are Sunday Michael, Luka Musa, Joy Sunday, Elijah Ishaya, Agada Sandra, and Abdulrahman Tijani.

The suspects, after their arrest, confessed to having lured eight other victims via the same mode of operation and have made N1 million from their victims at different times.

In his confessional statement, leader of the gang, Sunday Michael, an indigene of Benue State, said he was searching for information online when he came across the gay dating apps and decided to make use of it.

He said that it was poverty that pushed him into it.

I am gay!-Kehlani shocks fans, opens up on her sexuality

In his words, “I then activated the app and started using it and my aim was to use it to lure gay men across the country to Nasarawa State with the purpose of robbing them and collecting their valuables.”

He said he had robbed and stolen valuables of several gay men who have visited him in Nasarawa State and then threatened to report such a person to the police, but for fear of being arrested, they will then plead with him and his gang to allow them find their way.

He however added that the one that led to their arrest went to the police, despite the threat, to report the incident after they released him.

“We were surprised when policemen came to pick us up.

“After the gay man saw me and we started chatting, it was in the process that he proposed to me that he loves me and he wants us to be lovers, I told him I live in Nasarawa State, but that he resides in Imo State, but he promised me to come down to my place in Nasarawa State.

“I thought he was joking until I received his phone call that he was already in Keffi, the state capital and I sent him the address on where to hook up.

“Immediately he saw me he was very happy and we went straight to my house where we were to sleep. But before his arrival, I had planned with my friends already on what to do. While in the room, those my friends I planned with started harassing him and then brought out their phones to record his nakedness and also threatened to upload the video on all social media platforms.

“That was how he started begging me not to post the video and he promised to give us money, that he has N200,000 in his account. He gave us his Automated Teller Machine (ATM) and the pin and we withdrew the whole money and I shared the money with my gang members.

“This is the second time I have done something like that.

“In our first operation, we made N100,000 and the victim came from Kubwa in Abuja to Nasarawa State. I am appealing for forgiveness and I promise never to return to the act again if am pardoned by the police. I was arrested with my girlfriend, Joy, at the hotel where we went to lodge, but she knew nothing about the incident, I only called her to come join me at the hotel before we were arrested.

“I regret my action, police should please forgive me and I promised never go back to the crime again.” Another suspect, Abdulrahman Tijani, an auto mechanic who hails from Kogi State said the operation was his first outing with the gang.

“When Michael told me he was expecting a visitor, I thought he was joking, not until I saw the gay man. I joined others to hold him down when we wanted to strip him naked in ordered to video him, it was when he was begging us that he said he had ATM card with him, before he gave it to us we had already recorded him.

“It was after Michael came back from where he went to withdraw the money that we released him, not knowing he was going to report us to the police. “When the gay man was begging that we should not strip him naked, I also begged my colleagues on his behalf to allow him go, but they never listened to him, because of the money they wanted from him. My share of the money was N12,000 and we gave the gay man N4,000 for his transport back to Imo State.

“I am sorry for my action and promise never to go back to the act anymore. Police should forgive me.”

Our correspondent gathered that aside from the money collected from the victim, the suspects also collected his wristwatch from him before he was set free.

Meanwhile, one of the suspects, Luka Musa who claimed to be a Tailor said it was his friend Michael who told him about the deal a day before the arrival of the victim, because he knew nothing about it initially.

He said he was in his shop when Michael called him that the gay man had arrived and he left what he was doing to check on him in order to video the gay man so as to rob him, that was why he went to join Michael and others.

“It was in Abdulrahman and Mishak’s house that will hosted the gay man, Mishak and T boy are both at large now, immediately I enter the apartment we confronted him straight, telling him he was a gay man.

“We then threatened to report him to one of our uncles who is a policeman and also threatened to do a video recording of him and post it online.

“It was in the process of stripping him to record the video of him that he brought out his ATM card and started begging us to go withdraw the money in it.”