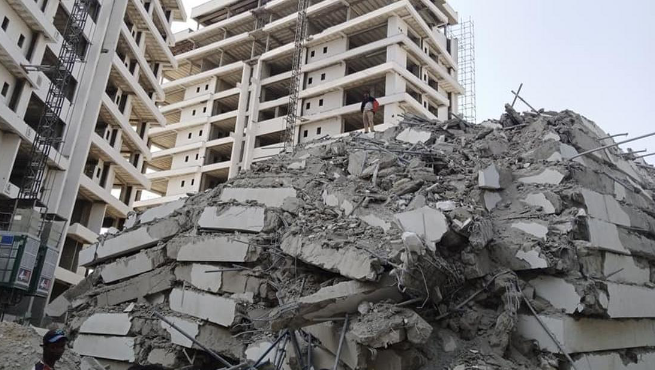 A pathologist, Dr Sokunle Soyemi, has revealed that five deceased victims of the 21-storey building, which collapsed on Nov. 1, 2021 at Gerard Road, Ikoyi, Lagos, are yet to be identified.

Soyemi, who is the acting Chief Medical Examiner of Lagos State, said this while testifying at an Ikeja Coroner’s Court on Thursday.

The pathologist, in his testimony, said there were 50 victims of the collapsed building (47 male and three female); 45 have so far been identified and their ages range from 18 to 56-years.

Revealing the causes of death, he said, “so far we have identified 45 bodies out of 50. The autopsies revealed that 40 deceased had multiple injuries as cause of death.

“Six had injuries to the head alone and died. One had bilateral fracture of the femure.”

The pathologist said the remains were put in 53 body bags because an additional three body bags had contained body parts of the deceased victims.

On the physical state of the corpses, the pathologist said the bodies could not be visually identified and samples had to be taken from the bodies for testing at the Lagos State DNA and Forensic Centre.

“After about a month, we started receiving results from the lab. As we were receiving the results we were also releasing the bodies to families and up till now, we are still releasing bodies.

“At present, of the 45 identified bodies, 42 have been released to family members while the remaining three have not been collected by family members.

“When there was a call for family members to come and donate samples, some people who were not related to the deceased came forward and the samples could not match.

“We had to call again for new samples from family members which came in about two weeks ago,” he said.

Soyemi in his evidence revealed that he never visited the site of the collapsed building during the course of his duties. He also noted that death certificates had been issued for the deceased.

The coroner, Mr Oyetade Komolafe, adjourned proceedings until Feb. 18 for continuation of hearing.

Of the three high-rise buildings (Blocks A, B and C), which were situated on Gerard Road, Ikoyi, Lagos, Block B (21-storeys), collapsed killing 50 persons.

One of the deceased was Mr Femi Osibona, the Managing Director of Fourscore Heights Ltd., the contractor of the project.