by Femi Ajasa
in News
Reading Time: 4 mins read
A A
0 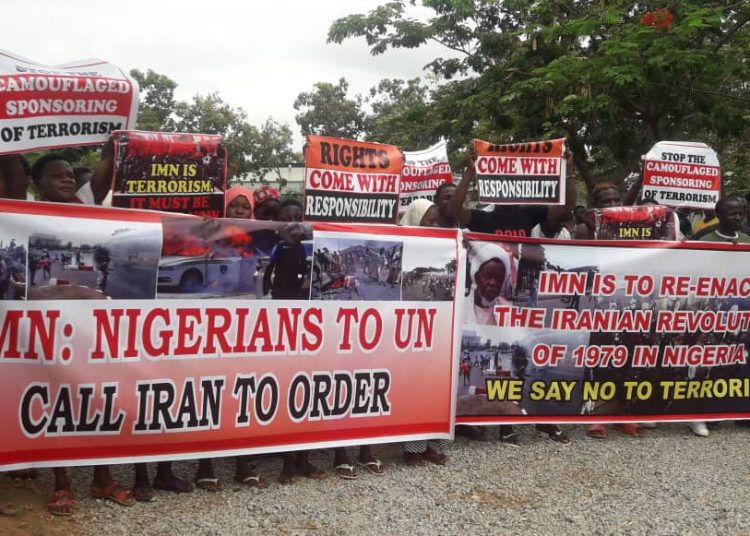 Protesters on Tuesday stormed the United Nations office in Abuja in protest against the alleged alliance between Iranian government and the Islamic Movement in Nigeria, INM.

Report had it during the weekend that the El-Zakzaky-led group was getting support from Islamic Republic of Iran to carryout terrorism across Nigeria.

The protest, organised by members of the Agenda for Terrorism-Free Nigeria (ATFN) called on UN to sanction Iran and El-Zakzaky for terrorism.

Danesi Momoh Prince, Convener, while speaking during the protest, urged the United Nations to call the Islamic Republic of Iran to order to desist from sponsoring instability against Nigeria.

The Agenda for Terrorism Free Nigeria (ATFN) found it pertinent to lead this protest march here, to the United Nations (UN) Offices in Nigeria today because of our firm belief that somewhere in the in the chaos that some state sponsors of terrorism are attempting to impose on the world there is order. That order is embodied by the UN, which through its organs is able to prevail on erring country to show respect, not just for the future and safety of the human race but also for the sovereignty of other nations, which is the recipe for peace and the assurance that nations do not embark on mutually guaranteed self-destruction.

From the demographics of those taking part in this march against importation of terrorism and extremism into Nigeria, it is apparent that we comprise of various groups. Many of us had in the past raised alarms about the activities of the Islamic Republic of Iran in Nigeria as manifested by its puppet group, the Islamic Movement in Nigeria (IMN). This is a group that has become the new face of Iranian sponsorship of terrorism abroad.

A further disclaimer we will make from the onset is that our organizations acknowledge and fully commit to Article 18 of the International Covenant on Civil and Political Rights, adopted by the UN in 1966. Article 18 clearly states that:

We therefore affirm that our protest today is not in any way construed to deny Iran and IMN members the right to subscribe to the Shia brand of Islam. We state this clearly because of the misconception that they have come to make the world believe that they are victims of persecution because of their faith, which is not the truth. The reality is that IMN as Iran’s proxy in Nigeria is denying others not just the rights guaranteed in Article 18 but other liberties that the world had agreed to accord humans across the planet. They deprive others of their lives.

Whatever crimes IMN had committed on behalf of Iran in the past have now paled in comparison to the latest coup they plotted against Nigeria. Trying to re-enact the Iranian Revolution of 1979, which transited that country into an Islamic Republic, IMN members on April 24, 2019 forcefully invaded the National Assembly of Nigeria with a view to overthrowing the parliament. It is no coincidence that this happened 40 years from the Iranian Revolution and about in as many years since the IMN leader, Mr. Ibrahim el-Zakyzaky, was first indoctrinated by that country.

This invasion is an affront on the rights of other Nigerians who have no desire to see their parliament overthrown by fanatics and replaced with a sectarian conclave because this was exactly what the IMN members reportedly have in mind even though they hid their attack behind claims that they were agitating for the release of their leader.

It is well known that Nigeria is presently battling Boko Haram terrorists, who sadly have foreign components that are yet to be diffused till date. It is unacceptable for Iran to add another terrorist organization to the list of foreign sponsored criminality that citizens now have to endure.

Concerns had been expressed in the past about how IMN is the Iranian vehicle for radicalizing youths to rise against and undermine the Nigerian state. The radicalized extremists seems to have now received their marching order to openly attack the state in an attempt to cause mayhem in the country. We consequently hold Iran accountable for any breach in security caused by its IMN extremists.

We wish to put the UN on notice that we shall be prevailing on the Government of the Federal Republic of Nigeria to activate Article 18 with particular emphasis on the provision that states that “3. Freedom to manifest one’s religion or beliefs may be subject only to such limitations as are prescribed by law and are necessary to protect public safety, order, health, or morals or the fundamental rights and freedoms of others.”

Nigeria faces critical life threatening security breaches from IMN and Iran. It is necessary to protect other citizens from the dangerous activities of the group in order to ensure that Iran does not get away with replacing Nigeria’s secularism with its own brand of theocracy, which is unacceptable in a pluralistic society that our own country is.

We are therefore calling on the United Nations to call the Islamic Republic of Iran to order, it should be given a clear directive to desist from sponsoring instability against Nigeria. The United Nations should also explain to members of the Islamic Movement in Nigeria that rights come with responsibility and the freedom of religious belief must not be confused with freedom to engage in lawless acts. They must both stop indoctrinating, radicalizing and inciting youths to become terrorists.

We conclude by telling the world that Nigeria is not helpless in dealing with the menace of IMN even when backed by Iran. There are laws and international instruments that clearly criminalize the extremist and fanaticism that they are propagating. We will demand that the government act in this wise. 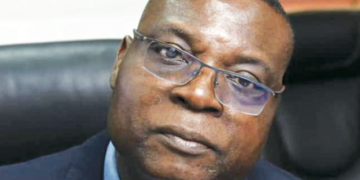