by Kehinde Ajose
in News
Reading Time: 4 mins read
A A
0 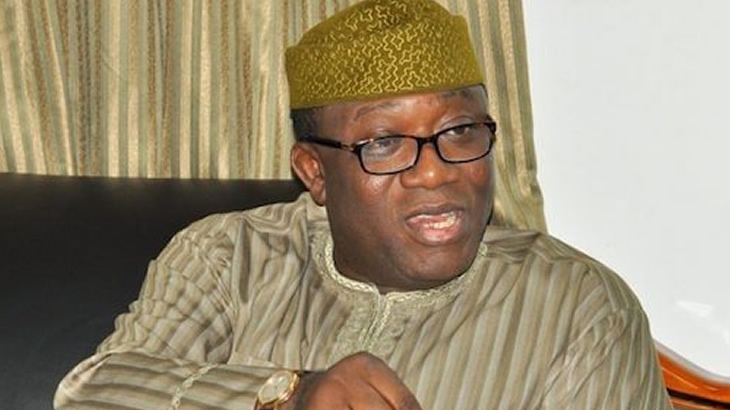 Chairman, Nigeria Governors’ Forum (NGF) and Ekiti State governor, Dr. Kayode Fayemi, has urged the Federal Government to enlist Nigerian graduates, participating in the mandatory National Youth Service Corps (NYSC), into the armed forces for at least two years in a bid for the country to overcome myriad of socio-economic and political challenges, besetting the country.

He gave the advice in a lecture, entitled: Security and National Unity in Difficult Times, which he delivered at the Babatunde Oduyoye Annual Birthday Seventh Lecture Series, held at the International Conference Centre, University of Ibadan, on Tuesday. Oduyoye, a former member of the House of Representatives is the current Special Adviser to Governor Seyi Makinde of Oyo State on Politics and Strategy.

The programme, co-chaired by a former Senate President, Adolphus Wabara, had a former governor of Oyo State, Senator Rashidi Ladoja, as father-of-the-day, and Oyo State governor, Seyi Makinde, as the chief host. Sokoto State governor, Aminu Tambuwal, who was to chair the lecture could not make it to the event.

According to Fayemi, who holds doctorate degree in War Studies, Israel has adopted recruitment of graduates into their armed forces for at least two years, and the system has been working for them, adding that developed countries have adopted multi-level policing system and it is working for them.

His words: “There are two things that we need to address quickly to bring the current wave of insecurity to a halt. We need to have a conversation on how we can recruit a large number of people to join the police and the military, even on a short service or otherwise. By available statistics, we need minimum of 200,000 personnel to boost the fighting power of our men. This number is very large and a potential financial and logistic nightmare, yet we cannot delay any further. The ungoverned spaces need to be closed up quickly by motivated men with the singular objective to save the nation.

“That takes us to the number two issue of financing and arming large recruitment. I believe one of the cheapest and fastest ways to handle this is to amend the law setting up the Nation Youths Service Corps (NYSC), such that we can use the existing orientation camps to train willing and able graduates to reflate the security personnel under a special arrangement that will be worked out. That way, the fund that is currently deployed to the NYSC can be used with just some additional funding, which could be sourced through a national emergency fund for the next five to 10 years.

“Those who cannot join the military services can serve in their community without pay if we must still retain the NYSC for everyone. To incentivise those who may volunteer to serve, they will have a separate certificate and medal of honour in addition to having priority for military, paramilitary and civil or public service recruitment after service.”

Fayemi, however, warned that it might be difficult for the country to overcome the rising insecurity if a new approach of multi-level policing system is not adopted, adding that the new approach would encompass state police. Both the federal police and the state police, he noted, would co-exist with defined jurisdictions.

He stated that the fear of a number of the people that governors could misuse state police should not be enough reason for the country not to have multi-level policing system, saying there were instances of occasions whereby federal police were misused by the powers that be.

“Our security structure as presently constituted cannot deliver peace and unity. It only breeds local resentment to the federal government which in spite of its endless and determined effort to end insecurity remains unappreciated because of the inability of the security structure to promptly respond to threats before they go out of hands. The time for state and other layers of a multi-level policing police system is now.

“In fact, the creation of Amotekun can only be a precursor to this. We need a security system that is localised, knowledgeable about the culture and security situation of a particular community. But we need to amend the constitution to empower the various security initiatives to be able to respond to the current challenges. For example, despite not possessing Ak47 which the bandits possess, Amotekun operatives have been courageous to confront them in the forest and have successfully rescued victims of kidnapping and arrested the criminals in some instances. Yet, these people are at best, volunteer corps with encouragement stipend paid to them. They don’t earn as much as the conventional police, yet they are better motivated to throw themselves to the protection of the community where they have their wives, children and families,” said Fayemi, who warned that the 2020 #EndSars protest would be a top of the iceberg on what would happen in the future of the powers that be failed to listen and act on what the Nigerian youths are saying.

Former President of the Senate, Adolphus Wabara, alao called on the Federal Government to stop what he described as its knee-jerk approach towards ending the security challenges facing the country. He noted that the last state-of-emergency that was scared in Nigeria was on Plateau State and he actually declared it as the Senate President, saying it is an area the Federal Government should not dabble into because its demerits are more than the merits.

“In recent days, the news media was awashed with stories credited to the Attorney General of the Federation, Abubakar Malami (SAN), where he threatened that the Federal Government would declare a state of emergency in Anambra State, in view of the wanton killings taking place there.

“Well, my party, the Peoples Democratic Party (PDP), has promptly reacted and told the Federal Government to back off such thoughts. In the same vein, the Ohanaeze Ndigbo, the Afenifere, PANDEF and other nationality groups have spoken. Rather than adopting the knee-jerk approach in tackling the myriads of security problems facing the country currently, the government at the centre needs to look deep down and design solutions,” he said.

How to take scrolling screenshots on your Apple iPhone